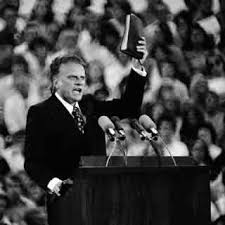 Since his ministry began in 1947, Graham conducted more than 400 crusades in 185 countries and territories on six continents. The first Billy Graham Crusade, held September 13–21, 1947, in the Civic Auditorium in Grand Rapids, Michigan, was attended by 6,000 people. Graham was 29 years old. He called them crusades, after the medieval Christian forces who tried to conquer Jerusalem.