Leon Czolgosz stood in line and counted the people between him and the president of the United States. Nondescript, dressed in a dark suit, and wearing an innocent expression, Czolgosz (pronounced chlgsh) looked younger than his 28 years. He had waited for more than two hours in 82-degree heat on September 6, 1901, for his turn to shake hands with President William McKinley, who was visiting the Pan-American Exposition in Buffalo, New York.

It was the first year of the new century, a perfect time to reflect on the nation’s rise in world prominence and to speculate on the future. The exposition, a world’s fair that celebrated the Americas’ industrial progress and achievement, had attracted visitors from around the world. The event was more than halfway through its six-month run when President McKinley, the most popular chief executive since Abraham Lincoln, arrived. 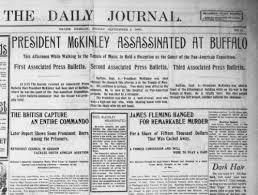 McKinley’s final public appearance in Buffalo was an afternoon reception in the Temple of Music,

an ornate red-brick hall on the exposition grounds. Since being elected president in 1896, McKinley had been notorious for discounting his own personal safety at public appearances, and he had repeatedly resisted attempts by his personal secretary, George Cortelyou, to cancel this event. Cortelyou had argued that it wasn’t worth the risk to greet such a small number of people, but the 58-year-old president refused to change his mind. ‘Why should I?’ he asked. ‘Who would want to hurt me?’

Cortelyou, always nervous about public receptions, tightened security as best he could. The people who wished to greet the president at the Temple had to file down a narrow aisle under the scrutiny of a special guard provided for the occasion. Outside, mounted police and soldiers controlled the massive crowd seeking entrance.

Surrounded by his entourage inside the Temple of Music, McKinley enjoyed the opportunity to meet his admirers. Host John Milburn, the exposition’s president, stood on the president’s left, so he could introduce acquaintances to McKinley as they approached. Secret Service agent George Foster, the president’s chief bodyguard, usually held that position, but he found himself five feet away from the president and standing opposite him. To McKinley’s right stood Cortelyou, who looked into the face of each person as they came close to his boss. He intended to signal the guards to close the doors after 10 minutes to stop the parade of well-wishers and then rush the president on to his next appointment.

President McKinley greeted each person with a warm smile and a handshake, pausing briefly to exchange words with any children who had accompanied their parents. The line moved quickly. Many in attendance held cloths to dab the sweat from their foreheads on the warm, humid day. As the waiting people shuffled forward, Foster noticed one man in line who had his right hand wrapped in a handkerchief. Foster wondered if it covered an embarrassing injury.

McKinley saw the man’s apparent disability, and he reached to shake his left hand. Suddenly, Leon Czolgosz thrust his bandaged right hand into the president’s chest. Onlookers heard two sharp popping sounds, like small firecrackers, and a thin veil of gray smoke rose up in front of the president. McKinley looked confused and rose up on his toes, clutched his chest, and leaned forward. Members of his entourage moved to support the slumping president and help him to a nearby chair as the blood spread across his white vest. ‘Be careful how you tell my wife,’ McKinley said, his strength already waning.