“Hello, Frisky,” she acknowledges her faithful pet. “Sick? Where?
Paris?”

“No, he came home four days after you left, seemed fine and
sorely happy to be back, even worked at the office for a couple
of weeks.” George gathers the courage he will need. “Then that
damned flue hit him from out of nowhere. I found him in bed when
the magazine called me wondering if I had seen him.”

“He is upstairs. The hospitals are full. Here, put this on, we don’t
need anyone else sick.” He hands her a mask.

“Is it that bad? I mean if the hospitals are full, that would be
thousands.”

“Didn’t you read the papers in California?” George asks like she
came from another planet.

“No, had no time, just heard talk of us winning some big battles
in Europe.”

She hangs her head. “That is why the streets are deserted, isn’t
it?”

“People are afraid to talk to anybody. And poor Harv, he was
shaken badly when he came home, only ten men survived on the
Navy ship he crossed the ocean in. He was putting together a story
when it got him.”

“You may not recognize him, lost a lot of weight, and he sleeps
all day, it’s all I can do to get him to take in fluids, but I think he’s
getting a little better.” George Eastman, the inventor of the Kodak
camera, a captain of the photographic industry, reduces himself to
nursemaid, helping his brother-in-law cling to life. “The good news is
that he has made it past the first day. Most people who die go fast,
mostly younger too.” 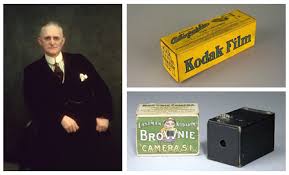 “He’s got a strong heart . . . . oh, Harv I am so sorry I wasn’t
here for you, can you ever forgive me?” She kneels beside their bed,
sobbing, not expecting an answer.

“Do you think I would die without being able to ask my partner
why she abandoned our magazine, to be a movie star no less?” Harv
Pearson’s speech is slow, but lucid.

“I can’t hug you yet, you rascal, but when I can, look out.” She
looks back at George, mouthing a hearty, ‘thank you’.

The Spanish influenza leaves as quickly as it had struck, erasing
thirty million lives along the way, in time to allow dancing in the
streets when the Armistice is signed and the Great War ends on
November 11th.

The close quarters and massive troop movements of World War I hastened the pandemic and probably both increased transmission and augmented mutation; the war may also have increased the lethality of the virus. Some speculate the soldiers’ immune systems were weakened by malnourishment, as well as the stresses of combat and chemical attacks, increasing their susceptibility.[13]

Academic Andrew Price-Smith has made the controversial argument that the virus helped tip the balance of power in the later days of the war towards the Allied cause. He provides data that the viral waves hit the Central Powers before they hit the Allied powers, and that both morbidity and mortality in Germany and Austria were considerably higher than in Britain and France.[14]

A large factor in the worldwide occurrence of this flu was increased travel. Modern transportation systems made it easier for soldiers, sailors, and civilian travelers to spread the disease.[15]

In the United States, the disease was first observed in Haskell County, Kansas, in January 1918, prompting local doctor Loring Miner to warn the U.S. Public Health Service’s academic journal. On 4 March 1918, company cook Albert Gitchell reported sick at Fort Riley, Kansas. By noon on 11 March 1918, over 100 soldiers were in the hospital.[16] Within days, 522 men at the camp had reported sick.[17]By 11 March 1918 the virus had reached Queens, New York.[18]

In August 1918, a more virulent strain appeared simultaneously in Brest, Brittany-France, in Freetown, Sierra Leone, and in the U.S. in Boston, Massachusetts. The Allies of World War I came to call it the Spanish flu, primarily because the pandemic received greater press attention after it moved from France to Spain in November 1918. Spain was not involved in the war and had not imposed wartime censorship.[19]