There isn’t much that’s going to outsell a superhero at the movie theater box office these days, so it makes sense for filmmakers to raid the comic book archives for the next big franchise. After all, comic book heroes come complete with storylines and a built in audience. However, there are a few bold filmmakers who made movies about original masked crime fighters created solely for the big screen. It doesn’t always work out, but when it does, it works out incredibly well.

Les Franken, played by Michael Rapaport, is a quiet and lonely parking attendant who loves comic books. He decides to volunteer for an experimental antidepressant test and after a few days, he notices that the drugs have given him superpowers. Unfortunately for Les, the doctor running the experiment, as well as his own friends, claim this is all in his head and he’s just having a psychotic reaction.

Les doesn’t believe them and tries to fight crime using his “powers,” which include the ability to float, telepathy, and teleportation. Throughout the film, it’s hard to say if Les really has powers, or if anything that happens in the movie is real. It’s a combination of dark, funny, and oddly uplifting as Les tries to live out his fantasy of becoming a crime fighting hero in a world that doesn’t believe in him.

Woody Harrelson stars in this masked vigilante movie as Arthur Poppington, who dons a black helmet and wears black make-up to become Defendor. Arthur was set on the path to fight crime after his mother left him when he was just a child, and later she died from a drug overdose.

When Arthur asked his grandfather who was responsible for killing his mother, his grandfather said “Captain Industry.” Showing an absurdly poor grasp on what that actually means, Arthur thinks that Captain Industry is a man named Radovan Kristic, and as an adult, tries to take down the man he’s somewhat arbitrarily and wildly misguidedly selected as his nemesis. He becomes Defendor and spends his nights attempting to put away Radovan, as well as a crooked cop he has in his employment.

This darkly comedic film from James Gunn, who would go on to directGuardians of the Galaxy, follows the adventures of Frank Darbo. Frank – played by Rainn Wilson – is a short order cook with a beautiful wife who just happens to be a drug addict. She eventually leaves him for a slimy strip club owner, played by Kevin Bacon, who was the person who got her addicted to drugs in the first place.

After his wife leaves him, Frank sinks into a depression, only to be lifted out of his state of despair when he’s inspired by a superhero on a public-access television show on the All-Jesus Network. That’s when he makes a costume and becomes the Crimson Bolt. He hits the street and fights “crime” by hitting people in the face with a pipe wrench. Eventually, rather than getting immediately locked up, he somehow gets a sidekick named Boltie, and the pair tries to take on the strip club owner in order to win back Frank’s wife.

For more than 40 years, Troma Entertainment has been distributing and producing B-movies that are equal parts campy and gruesome. Their most famous film, which is used in their logo, is 1984’s The Toxic Avenger. The origin story of the Toxic Avenger is that he was a 98-pound weakling named Melvin Ferd, who worked as a janitor at a health club.

At the club, four gym members torment Melvin and after a particularly nasty prank, he jumps out of the health club’s window and lands in a barrel of toxic waste, leaving him burned and disfigured. He begins to transform into a large mutant with super strength and a heightened sense of awareness that tells him where crimes are occurring. Using his trusty mop, he sets out to clean up the streets of the fictional Tromaville, New Jersey. The film was a hit for the small independent film company, spawning three sequels, an animated television series, and a musical stage production.

One night when he was a child, Sean Donovan was out with his mother and abusive, alcoholic father, when the family is set upon by carjackers, and his mother is killed before his eyes. Jump ahead a few years to Sean as a teenager, and it’s clear that he’s incredibly bright, and even speaks fluid Mandarin. Not only is he smart, he’s also fast and lean, having trained as a boxer for years. But as you might expect from someone who watched his mother get murdered, he’s also deeply disturbed.

Sean’s withdrawn and quiet, spending most of his time looking at mug shots in search of his mother’s killer. One day the quiet teenager stops a crime in progress and doles out an extremely violent punishment on the perpetrator. This sets the wheels in motion for Sean to begin a mission of vigilantism and personal revenge as his life spins out of control, trying to right wrongs while searching for his mother’s killer as the police frantically try to track him down.

After the success of Evil Dead II, director Sam Raimi was looking for a film to make with a major Hollywood studio, originally setting his sights on famed comic and radio character The Shadow. When he couldn’t get the rights, he chose to make his own character. Darkman was born, and played by Liam Neeson decades before people realized what an enormous badass Neeson really is.

Darkman’s real identity is Dr. Peyton Westlake, a scientist who developed a new synthetic skin to help people with acid burns. One day, some bad guys come to Peyton’s lab looking for a document that his girlfriend left behind. To get Peyton to tell them where the document is, they burn him with acid and blow up his lab. He survives, but not without suffering full body burns. To help manage his agony, a doctor severs the ends of his nerves, leaving him invulnerable to pain. He breaks out of the hospital and uses his synthetic skin to help him set off on a path of revenge.

The movie was a moderate success at the time, but was overlooked for years – at least, until Raimi helped kick off the current superhero renaissance with Spider-Man. It’s since become a newly rediscovered cult classic.

One of the most thought-provoking superhero movies of all-time, M. Night Shyamalan’s Unbreakable is an atmospheric movie that has barely any action. That alone sets it apart from most other films in the genre.

The movie opens with a man named David Dunn emerging from a train crash as the lone survivor – not only alive, but without a scratch. After the accident, David meets a man named Elijah Price. Elijah is an incredibly fragile man, sickly and brittle to the point where he earned the nickname Mr. Glass as a child. Elijah’s looking for a man on the other end of the spectrum, and discovers his match in David. Unbreakable is a fascinating look at the world of superheroes and villains, and how they might realistically fit into the real world.

This loving send-up of the superhero genre from Pixar Studios is about what happens when superheroes try to settle down and live average lives. Bob and Helen Parr – formerly known as Mr. Incredible and Elastigirl – have three kids, all of whom have powers. After being forced into a boring, suburban retirement, Bob gets an itch to start fighting crime again. Eventually, he’s given his shot thanks to a mysterious benefactor he later realizes is a supervillain he unintentionally helped create years before. The villain, Syndrome, was Mr. Incredible’s biggest fan as a child, but after Bob shunned him it set him down a dark road that culminates in a plan to kill off superheroes and claim his own fame and fortune.

The Incredibles wowed audiences of all ages and impressed the critics, boasting the highest Rotten Tomatoes score of any superhero movie and winning an Academy Award for Best Animated Feature Film. Brad Bird, who wrote and directed the first film, is currently writing a sequel.

Chronicle follows three high school seniors, Andrew, Matt and Steve, who find a glowing crystal in a hole in the forest. After interacting with the crystal, they gain superpowers that include telekinesis and flight. Their powers develop, but Andrew – a meek, quiet kid whose mother is dying of cancer and whose father is an abusive drunk – quickly becomes the most powerful of the group. With his troubled past, it doesn’t take long for the frequently bullied Andrew to turn down a dark path toward villainy.

Andrew’s story is one of the most sympathetic origin stories for a villain in the superhero genre. It’s a fascinating look at what happens when certain individuals are given god-like powers, and also makes the viewers to ask themselves if they’d use such powers for good? Or smite those who have wronged them?

RoboCop is the 1987 Paul Verhoeven classic starring Peter Weller as Alex Murphy, a dedicated cop in the not-too-distant future of crime-ridden Detroit. The city makes a deal with a mega-corporation, called Omni Consumer Products, which plans on automating the police force in exchange for the right to develop high-rise apartments. Since OCP is running the police force, they look at more effective ways to do so, moving forward with the RoboCop program.

When Murphy is killed in the line of duty, his body and remaining consciousness are fused together with the RoboCop suit, creating a cyborg super-cop. Eventually, his memories and soul begin to overtake the robot side of himself and he sets out to find the people who tried to brutally murder him. This film has one of the more interesting connections to comic books, in that the films actually did inspire a comic book, and a number of original RoboCop series have been published in the ensuing years. 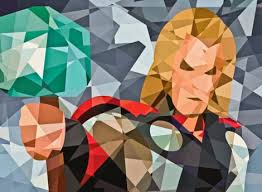