…“That would make me 17, I’d like that,” Fanny claims mistakenly…

On the way down U.S Highway Rt. 66, the iconic artery that begins in Chicago and ends in

Los Angeles, Martin Kamen fills the girls in on just why he has summoned them 1100 miles north:

“Two weeks ago, a colleague of mine, well, more of a mentor of mine, Dr. Willard Libby disappeared

from his office and has not been seen since. He had been acting a bit squirrelly lately, brilliant people often are, but normally you can set your watch by this man.

back. The two of them met with me and Sam Ruben at the University of California-Berkeley to discuss our discovery of and about the carbon-14 isotope. Fermi had this idea that the 14 isotope was unique compared to carbons-12 & -13, based on its presence in all living things and its singular half-life.”

“That would make me 17, I’d like that,” Fanny claims mistakenly.

“No, no. Carbon-14 has a half-life of 5,730 years when factoring in radioactive decay. For example, if someone discovers your remains, say 200 years from now, they will be able to determine how old you were when you expired. Now that won’t be for many, many years I hope, Miss Fanny.

“As I was telling you, Doctor Libby was out our Argonne offices and seemed to be distracted while he was in preparation of his scientific papers concerning this assertion – and then he vanishes without a trace. We were supposed to have a seminar on the topic, between those of us in the know last week, but it had to be canceled. Without Libby what would be

the point. We all expected him to address the rumors that he supported the notion that the Universe may be aged 20,000 years, 4.52 billion.”

“That’s what we are taught in science class, Martin.”

“Yes you were, but to extrapolate the half-life of carbon-14 out to inorganic material is a fundamental stretch of the truth, or at least we were coming to find out.” 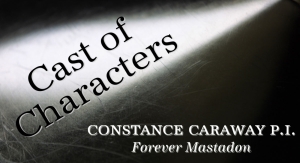