“That is I, Mary Joseph Franks, of the Holy Mothers of Augustinians… Willard Libby is my sister’s boy.”

“Knock me over with a feather.”

“I am the Director of Retreats.”

“Retreats? We were under the impression that your—nephew—came to Sunday mass

“Oh no, we are not a functioning place of worship. People come here to fast and pray, get closer to Our Lord Jesus.” Mary Joseph is serious about the mission of this Augustinian Order.

“By the way, these are my colleagues, Miss Fanny and Mr. Martin Kamen of the University of Chicago.” They bow in turn. Sister Franks gives the ecumenical sign of peace. “What was Willard Libby doing here the week of December 3rd?”

The erstwhile nun is busy paging through a 24 inch square registration tablet.

“He was retreating with a Mr.(Enrico) Fermi and a Mr.(Billy) Graham, very famous – very nice gentlemen… and 3 others; spent two days, three nights in Holy seclusion.” She was guessing about that last conclusion.

“One other of them gave me the willies, Wolfgram, Vincent Wolfgram was his name. There was a coldness about him, flashed an official looking badge in my face, did not stay overnight and refused to sign the guestbook.” That she would not think well of every soul that passed through the doors of this sprawling estate is surprising.

“Oh my, how can I forget, my word… and they were joined by Cardinal Stritch, the Archbishop of Chicago, I have heard many wonderful things about him… and the fifth man was an emissary from The Vatican, yes, Ernesto Pacelli. We were so honored to have them here.” 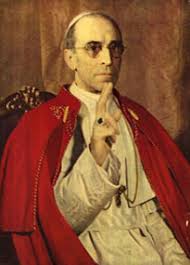 “Did Willard tell you why they chose Tolentine to meet?”

“He did mention something about a message from the Holy Father. Can you imagine my nephew and Pope Pius?”

The CCPI band of investigators is taken to the south wing of Tolentine, where the men in question spent the majority of their time.

Trying to do her best not to raise suspicion, Constance appears to wander aimlessly through the halls, looking for tangible clues left behind by the men. She checks all the waste baskets she can find, not exactly an ordinary thing to do.