…Was one of your fares a beautiful woman and two little girls perhaps?…

Aldona Afridi continues his defection to save Space Colony 1

“We must cross the Golden Horn to get reach Galata.”

The Golden Horn is an inlet of the Bosporus, the narrow band of water separating them from the mosque. The main bridge that connects Galata to Stamboul is choked with evening traffic and in the waters below is 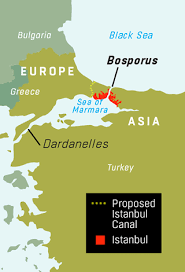 nearly as busy, with floating forms of alternative transportation. Boatmen take their fares in the same dinghies driven by a hundred generations, bobbing side-by-side with a number of larger commuter boats.

A certain ferry commands Aldona’s attention. He scans each bow for the name Mother of the Black Sea, the ship of escape for (his wife) Fatima and the girls. It may be either under-sail or moored, are they aboard or are they ashore, in the safe confines of the mosque?

“There are many a ferry tonight, Saied,” the driver notices his passenger’s keen interest.

“Is the Mother of the Black Sea one of them?”

“Oh yes Saied, the largest of them, with the many lights no doubt. It is docked for the night.” He smiles fondly at the thought; the daily visits by the Black Sea ferryboat are a boon to the taxis.

“Docked this afternoon you say? Did you have any fares from that boat?”

“Oh my yes Saied, every docking brings many fares.”

“Was one of your fares a beautiful woman and two little girls perhaps?”

“No, but I may have seen such a group coming down the ramp, more baggage than my humble cab can carry. I think poor Muhammad XXVII may have gotten them, not good for his bad back.

“Can we go faster; I need to get to the mosque yesterday?”

“We will kill more than pecking chickens…The world has gone mad for haste….”

“I don’t care; get us out of this stagnant mess.”

Never let it be said that a good taxi driver does not enjoy a challenge, especially if it involves driving obnoxiously; foot to pedal, hand on horn.

And the race is on!! The resourceful combination of a jet ski and a golf cart squirts through gaps barely wider than a bicycle, prompting Afridi to scrunch his shoulders and close his eyes. But as in old movie sight-gag, they magically appear on the other side, clear of the bottleneck.

So, leaving the trail of tangled auto, with their fist-shaking drivers behind, the Sultan Ahmet Mosque is mere minutes away in Galata, the commercial hub of Old Constantinople.

All in all, Afridi has time to loosen the noose around his neck, having left the hardest roads behind. That he lives to tell the tale is testimony to his firm resolve and evidence of his good fortune. When he was back in that cold river, bullets splashing like rain around him, his long-term welfare was undecided at best. Hopefully there will be sympathetic ears to hear his story, at the end of his cross-continental campaign, ending here in the land of the Great Crusades.