See in the Future

Obviously any article dealing with ‘future’ anything is largely speculation. This is doubly true in an industry that, despite seeing plenty of technological breakthroughs over the years, hasn’t really changed much in all that time because major overhauls are rarely worth the cost to implement. Regardless of what type of engine or propulsion system the aircraft has, you check your bags, get screened, stand in line, sit in crowded coach seats with a TV, round window, fold out tray and peanuts, or you get a little more legroom and champagne in first class. Airlines are airlines, is the point, and they have been for decades.

But that hasn’t stopped people from dreaming bigger, developing better and faster ways to travel via air. And with the age of fossil fuels coming to an end, who’s to say some of these ideas won’t finally see the light of day when aircraft designs are overhauled? We’ve collected a handful of the coolest ever commercial airline trends of the future. So lock your tray in the upright position and let’s take off. It’s probably not too surprising that very few of the ideas that’ll grace this list, or any similar one, will revolve around burning fossil fuels. Why would they? Burning gas and coal is effective but dirty and archaic, and the world is sprinting towards renewable, clean energy sources. And if electric cars are making a splash, there’s no reason to expect we won’t be seeing electric planes in the hopefully not too distant future.

Small electric motors, like those featured on NASA’s X-57 prototype, will allow even a large aircraft’s propulsion to be distributed across the structure of the plane. Not only does this minimize the impact of a potential engine failure, but reduced operational costs and noise levels will greatly expand the ability of aircraft to travel near places of business and residence. That might sound like a nice enough, but ultimately small, improvement over the airline status quo. But in reality, it could transform commercial air travel from what are essentially flying passenger ships to modest air taxis, transporting goods and people nearly to the doorstep of their destination.

As is the case with cars, ships, trains, or any transportation, really, electric aircraft propulsion isn’t the only option we’ve got to combat greenhouse-emitting fossil fuel dependency. Furthermore, given the decades-long service life of most passenger jets and various other frustrating factors, it’ll be two to three decades before we’re able to fully transition away from gas powered planes and onto something more environmentally sustainable, even if we started building electric ones exclusively starting tomorrow.

While we wait for that change, though, and get our ducks in a row, replacing fossil fuels with biofuels (special combustible crops, or algae) would reduce airline carbon emissions by 35-85%. It’s still important to keep in mind that biofuel cost parity with current fossil fuel sources is still a decade or more out. But like we said, that’s roughly half the time it’ll take (at least) to transition fully to electric power, and you can’t hammer away at prohibitive costs while sitting around complaining about them. The planet can’t wait forever for us to take its health seriously, so more green airplane tech is a noble goal to aim for.

Here’s another trend we’re seeing everywhere: the replacement of humans with machines. The military realized a while back that sending robots to the battlefield is infinitely better than putting boots on the ground, and now we have missile-launching, remote piloted drones doing the work of jet fighter pilots. Commercial airline pilots aren’t exactly in much danger, but then again, neither are cashiers, lawyers, truck drivers, delivery men, shelf stockers or even hospital orderlies, all of whom are in danger of losing their jobs to an algorithm that doesn’t even know it exists but can still perform better, cheaper and longer than even the best human for the same job.

There’s no reason to think that if automated cars are rapidly approaching, we won’t see equivalent when it comes to air travel. As travel increases, so too will the demand for pilots (the current global 200,000 is roughly about a third of what experts predict we’ll need in the next two decades). Facing such looming personnel shortages, a new system that requires no training, sick days or paychecks looks appealing indeed. This basic design is hardly new (think the SR-71 Blackbird), but it never got off the ground as far as commercial useable when it was first introduced, largely because it featured amphitheater-style seating in which passengers would sit in long rows rather than columns which allowed for easier movement. Imagine having to use the bathroom when you’ve got 25 people on either side of you… “Excuse me. Pardon me. I’m so sorry. Don’t go back to sleep, I’ll be back in a minute. Pardon me, sorry.” But that’s fixable if you put your mind to it.

Now imagine the vast majority of aircraft passengers having no windows in such a design. Now that could be an issue, because the lack of visual references would result in dizziness and sickness. As if most commercial jets aren’t unpleasant enough. But with new electric engineering, the possibilities to replace the drab interior of an airliner with advanced screens are endless. You could project just about anything onto them. The easiest thing would be to simply let folks see what’s just outside. Imagine being surrounded by clouds during a flight, rather than having to observe them through a tiny window. That might seem unnecessary and pointlessly expensive, but tailless planes would eliminate the need for currently required elevators, rudders and, well, tails, all of which strangle maneuverability and add significant, fuel-burning drag.

Speed. It’s the one, seemingly basic arena of commercial flight that’s gone backwards in recent decades, rather than forwards. The hook-nosed Concorde aircraft allowed for supersonic passenger jet travel as far back as the 1970s (its maiden flight was 1969), after all. But ballooning costs, frequent malfunctions and the unacceptability of sonic booms over metro areas forced airlines to mothball these and similar craft indefinitely. But not everyone gave up the dream.

Recognizing that costs are as much to blame for the lack of Jetsons-level society as inadequate technology, Silicon Valley startup Boom Supersonic has been working tirelessly to reintroduce faster-than-sound commercial air travel at lower costs. Other projects with similar ambitions are popping up, too, such as the still under development Aerion AS2. But even those quite literally deafeningly fast planes would be snacking on the dust of DLR’s suborbital hypersonic SpaceLiner, which could take you (at speeds in excess of Mach 25) from London to Sydney in an hour and a half. The availability of such rapid travel would revolutionize the planet in ways that are difficult to imagine. 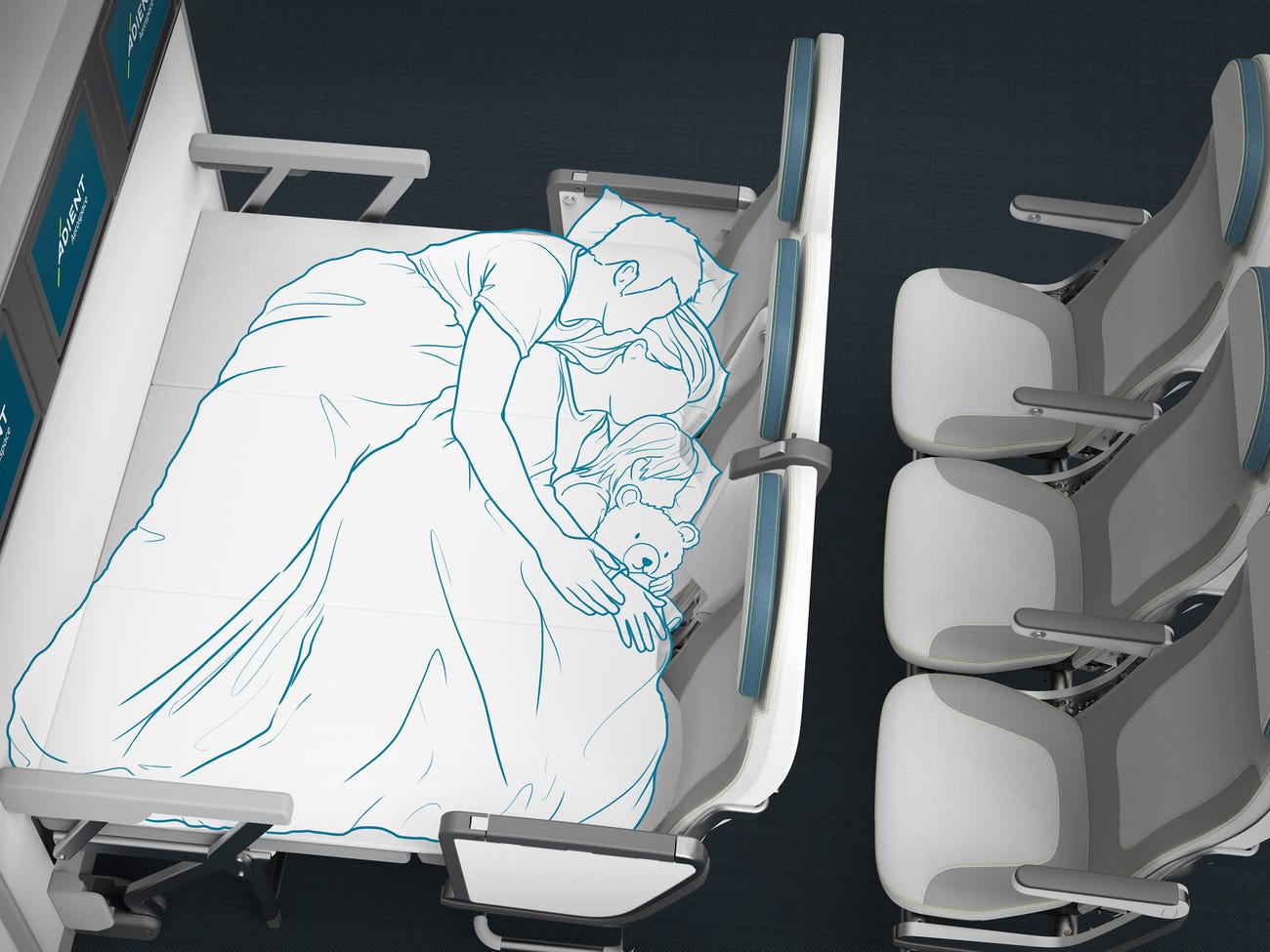 Not all airline-changing ideas have to do with aerodynamics, fuel efficiency or propulsion systems. One area that’s been in desperate need of overhaul for decades is the cramped, groan-inducing interiors of nearly every commercial passenger jet. There’s som variation in accommodations, but not much. Most are riffs on the same one or two lane design that stuffs miserable commuters shoulder to shoulder with about a half-inch of legroom and a bag of dry peanuts.

Luckily, Hamburg Aviation’s Crystal Cabin Awards aim to award anyone – please, anyone – who can design the next generation of airborne commuter comfort. The link above has no shortage of eye popping ideas. There’s Airbus’s winning submission, featuring spacious seating and an app that lets commuters order food, communicate with the crew and set lighting and temperature for their seats. AerQ also had a game changing idea, to do away with the class barriers that separate first and economy class seating and only serve to increase the claustrophobic conditions of spending several hours in a giant metal tube. Aident went in another direction entirely and straight up added a bed to the economy section. The ideas are out there, airlines. Assuming any of you survive the Covid-19 crisis, think about implementing one or two of them. For the sake of our knees and sanity.

Don’t expect to be on the moon in the next few years unless you’re already working for NASA. But in little but steady increments, private companies like Elon Musk’s SpaceX and Richard Branson’s Virgin Galactic are beginning to take the reigns of space flight from government funded giants the world over. Cost, of course, is and always has been the main issue. But only by diligently swinging away at those barriers can they ever be reduced. Right now, the cost of lifting cargo into orbit is plummeting. Again, it won’t be at levels where we can expect to head to the star port for a Thursday afternoon business meeting on a space station for quite some time. But it’s on exactly the trajectory we want it to be on.

Other advances have been made towards reusable rockets (as opposed to long-existing and current models where we have to dump the spent boosters into the ocean), and in low cost resupply runs to keep in-orbit craft fully stocked for the long haul. Investor seeding and government co tracts are currently the only way to keep the private space-minded giants funded. But hopefully sooner than we think, rich benefactors will be the first private passengers beyond the planets atmosphere. Their money will make further developments easier to reach, which will in turn drive down costs even more.

Fly Me to the Moon

One thought on “Fly Me to the Moon – WIF Aviation”