The fate of nations and empires have depended upon control of the high seas throughout civilization. From well-populated coastlines to the most remote ocean depths, sunken vessels lie dormant in a vast watery graveyard, serving as a reminder of the countless battles waged.

Here’s a rundown of some largest and most decisive naval battles that not only changed the tides of war but altered the course of world history. Long simmering tensions between the Ottoman Empire and Catholic states in the Mediterranean reached a boiling point when Muslim forces captured the Venetian island of Cyprus in 1570. This following year, roughly 500 ships clashed at the Battle of Lepanto, marking the last major engagement powered mostly by oar-driven vessels in the Western world.

Viewed by both sides as a religious mandate, the conflict saw the formation of the Holy League, a coalition assembled by Pope Pius V, consisting of Spain, Venice and the Papacy. Although they would face a battle-tested Turks led by Ali Pasha, command of the alliance was handed to John of Austria, an ambitious tenderfoot with a checkered past.

As the illegitimate son of Holy Roman Emperor Charles V and half-brother, King Philip II of Spain, “Don Juan” led a charmed life as a member of the House of Habsburg. The 24-year-old playboy was not the Pope’s first choice to lead the Holy League’s fleet, but when Phillip agreed to finance the righteous rumble, the young admiral received the nod. Miraculously, he exceeded all expectations.

The Ottomans sailed westward from their naval station in southwestern Greece near Lepanto (today Nafpaktos) into the Gulf of Patras. There, they collided with the Christian fleet equipped with more than 200 galleys and bolstered by 44-gun Venetian galleasses (much larger galleys).

By the time fighting ceased, the Holy League had captured 117 Turkish galleys and liberated around 12,000 enslaved Christians. Moreover, the victory effectively thwarted Ottoman military expansion into the Mediterranean. Big, bloody, and befuddled is one way to summarize the First World War‘s biggest sea skirmish. ‘Stalemate’’ is another. Fought over 36 hours beginning on May 31, 1916, the Battle of Jutland involved more than 250 ships and 100,00 men and produced the only instance in which British and German ‘dreadnought’ battleships directly engaged each other.

Under the command of Admiral Reinhard Scheer, the German High Seas Fleet attempted to cripple the Royal Navy by luring Admiral Sir David Beatty’s battlecruiser force out into the open. However, the British caught a whiff of the plan and quickly dispatched Admiral Sir John Jellicoe’s Grand Fleet that had been stationed at Scapa Flow in the Orkney Islands.

The two belligerents then tangled northwest of the Danish peninsula, where the outgunned Germans managed to inflict severe damage, sinking the HMS Indefatigable and HMS Queen Mary, which exploded when enemy shells hit their ammunition magazines. Although the British lost more ships and twice as many men, both sides claimed victory. Fittingly, the muddled outcome mirrored the same futility found on land in trench warfare.

The German fleet was forced to return home, having failed to break the Royal Navy’s blockade of the North Sea. The retreat reaffirmed Britain’s stranglehold on vital shipping lanes, a critical factor that contributed to Germany’s eventual defeat two years later.

6. Battle of the Masts In one of the first major naval engagements between Muslim forces and the Christian Byzantine Empire, the Battle of the Masts unfolded off the coast of southern Anatolia in 655 CE. The fight for control the Mediterranean saw both sides suffer heavy casualties, resulting in what has been hailed as “The first decisive conflict of Islam on the deep.”

The Rashidun Caliphate, having recently conquered Egypt and Cyprus, then set its sights on bringing Byzantium under Muslim control. Led by Abu’l-Awar, 200 Arab boats sailed north towards the harbor of Phoenix (modern day Finike), where they encountered the 500-ship Byzantine navy, commanded personally by Emperor Constans II.

Fuelled by hubris and a vast numerical superiority, Constans (Constantine the Bearded) didn’t bother to bring his fleet into formation and instead plowed straight into the enemy. Big mistake. The blunder created heavy congestion, nullifying the Byzantine advantage as a clutter of masts flying either a cross or a crescent would give the battle its name. Constans barely escaped the carnage by switching uniforms with one of his officers. The result also marked the beginning of significant Muslim influence on the Mediterranean.

5. Battle of the Philippine Sea Portuguese navigator Ferdinand Magellan is credited with discovering a previously uncharted body of water that he named ‘Pacific’ for the calmness of the water. Ironically, the exploration soon led to his violent death, slain by natives in an archipelago that came to be known as The Philippines. Some 400 years later, the same area saw more mayhem with the largest aircraft carrier battle in history.

The Battle of the Philippine Sea began on 19 June 1944 and rapidly progressed in favor of the Allies. A total of fifteen aircraft carriers from the U.S. Fifth Fleet’s Fast Carrier Task Force (T.F. 58) flexed plenty of muscle as part of the most extensive single naval formation ever to give battle. The Imperial Japanese Navy (IJN) quickly became overwhelmed, losing three aircraft carriers and 395 carrier-based planes. American airmen described the action as a “turkey shoot” that included six confirmed kills in eight minutes by Navy pilot Lieutenant Alexander Vraciu.

By comparison, U.S. losses were light in comparison with one battleship damaged and 130 aircraft destroyed. The Japanese not only lost one third of its carriers but nearly all of its carrier-based aircraft. Remarkably, the depleted Japanese forces would continue fighting to the bitter end for another 14 months. The stakes couldn’t have been any higher as opposing naval forces led by Mark Antony, and Octavian squared off for control of the Roman Republic on September 2, 31 BCE. The evenly matched sea battle involved 800 ships, colliding near the Greek peninsula at Actium.

The assassination of Julius Caesar some 13 years earlier still weighed heavily on both sides, adding to the high drama. The famed general was Octavian’s great-uncle, and Antony formed a personal and military partnership with Cleopatra of Egypt, who just happened to be Caesar’s former flame.

According to historian Plutarch, the fighting quickly took on the characteristics of a land battle in which the two sides launched flaming arrows and heaved pots of red-hot pitch and heavy stones at one another’s decks. Antony’s large, well-armoured galleys were equipped with towers for his archers, large battering rams, and heavy grappling irons. Octavian counter-attacked with a fleet of smaller vessels provided greater speed and maneuverability, tactics that ultimately won the day.

The conquering hero would take the name “Augustus” to become Rome’s first Emperor, launching a prosperous reign that lasted 40 years. As for Antony and Cleopatra, things didn’t end well. The star-crossed lovers fled back to Egypt, where they committed suicide. The tragic romance later spawned a Shakespeare play and slew of big-budget Hollywood flicks. Reviews were mixed. Centuries of fighting between the Greeks and Persians produced one of the more spirited rivalries in ancient warfare. Following their victory at Battle of Thermopylae and the sacking of Athens, forces led by King Xerxes I of Persia looked to expand further with an amphibious invasion in 480 BCE. Historians have long debated the size of the Persian armada, but some accounts list a surplus of well over 1,000 ships.

Facing total ruin, the Greeks hatched an ingenious trap by luring the enemy into a narrow and winding strait between the island of Salamis and the Greek mainland. The defenders occupied a position next to an inlet perpendicular to the entrance with a fleet of 370 triremes and began ramming and boarding Persian vessels in the congested waterway.

As panic ensued, the numerically inferior Greek force sank more than 300 of Xerxes’ ships. The defeat forced the Persian to put the invasion on hold — a significant turning point in the Greco-Persian war that saved Hellenic culture from annihilation.

In the waning days of the Han Dynasty in China, a classic battle occurred featuring a smaller force overcoming tremendous odds to defeat a much larger navy. A trio of warlords had been vying to seize power in the winter of 208 AD, before finally erupting in one of the more spectacular naval engagements in ancient history.

Troops under Cao Cao prepared to invade the southern territory surrounding the Yangtze River Valley with a massive armada and 250,000 men. In response, Liu Bei and Sun Quan hastily formed a coalition with a combined force of 50,000 troops. However, the undersized alliance relied on a cunning battle plan based on deception — a ruse that worked to perfection.

While feigning surrender, the defenders floated several dozen ships filled with oil and straw towards Cao Cao’s fleet, which had been bunched together in a narrow space near an area known as the Red Cliffs. A favorable wind helped propel the ‘defectors’ ships’ forward as fire quickly spread throughout the invader’s entire formation, resulting in chaos and panic among Cao Cao’s men. The Southern allies exploited the advantage, unleashing the bulk of its navy to destroy the retreating enemy. Considered by many historians as the largest naval battle of all time, the Battle of Leyte Gulf involved a series of engagements between the United States, and Japan fought off the Philippine islands of Leyte, Samar, and Luzon. The Americans’ plan was designed to achieve two main objectives: liberate the Japanese-occupied Philippines while regaining strategic bases in the Pacific to hasten the end of World War II.

By October 1944, the once-mighty Imperial Japanese Navy had been severely weakened from previous campaigns. Nonetheless, they still managed to assemble a formable array of heavy-gun warships as well as the first use of organized kamikaze attacks. The Allies countered with the full juggernaut of the U.S. Third and Seventh Fleets with a combined total of about 200,000 personnel.

The battle stretched over three days in which the Japanese suffered catastrophic losses, crippling its ability to fight as an effective naval force for the remainder of the war. Twenty-six Japanese ships and around 300 planes were destroyed — either by anti-aircraft fire or kamikaze attacks — and more than 12,000 Japanese sailors and airmen died. During an interrogation after Japan’s surrender, Admiral Mitsumasa Yonai, the Navy Minister, said of Leyte, “I felt that that was the end.”

By the Sea, By the Contentious Sea 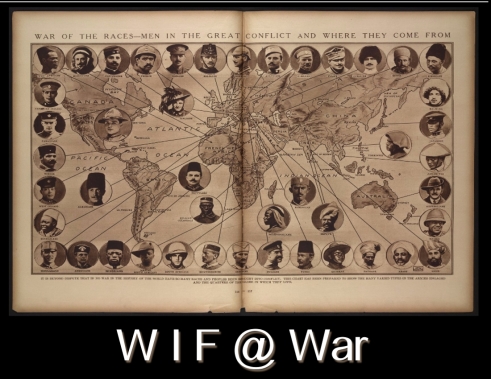