Through technological advancement and good old-fashioned human stubbornness, much of the Earth has been mapped and human boots have touched down on virtually every continent, island, desert, forest, and icy plain… or have they?

It might surprise some people to learn that there are still vast areas of the Earth left uninhabited, explored, or even mapped properly. While it is true that much of the Earth has been surveyed, vast portions of wilderness in Chile haven’t been, a handful of mountain summits remain untouched, countless cavern systems have gone unexplored, and the ocean floor remains a vast, alien world left unmapped by humans.

Here are the top 10 places where people have never been. (Except Photographers)

Muchu Chhish is a mountain in Pakistan which reaches a staggering 7,453 meters, and to this day, the summit has remained unclimbed.

In 2003, Bhutan banned all climbing, but some expeditions have been able to obtain permits. In 2014, English mountaineer, Pete Thompson, attempted to scale the mountain, hoping to reach the summit. Thompson expected to have to climb the final 1,453 meters without ropes, but the presence of hard ice derailed his plan to reach the top, forcing him to turn back at the 6,000-meter mark.

Prior to Thompson’s attempt, a Spanish team was rumored to have made it all the way to 6,650 meters and remains the highest point on the mountain anyone has reached.

Pakistan is home to 108 peaks taller than 7,000 meters, and many of these peaks belong to the Karakoram mountain range, of which 40 to 50 percent is covered in glaciers. This mountain range is so large that it borders China, India, Pakistan, and even extends to Afghanistan and Tajikistan. The Karakoram range is also one of the world’s most geologically active areas, as the range was created by the interaction of the Indo-Australian plate and the Eurasian plate. Earth’s ocean floor is a vast, alien world, which remains almost entirely unexplored by humans. While satellites have managed to map almost 100 percent of the ocean floor at low resolutions, more than 80% of it has yet to be explored or mapped at higher resolutions.

James Cameron famously explored a portion of the Pacific Northern Valley, known as Challenger Deep with a one-man submersible. Challenger deep is thought to be the deepest known point in the Earth’s seabed, reaching a depth of 10,920 meters. Cameron’s dive managed to reach an impressive depth of 10,908 meters, setting the world record.

One of the main reasons why so much of the ocean floor has yet to be mapped is due to the difficulty of developing vessels which can survive the immense pressures and conditions present in the deepest parts of the ocean floor. The deepest portions of the Mariana Trench experience a pressure of eight tons per square inch, enough to crush the human body into a messy pulp.

Before the first divers made their first journey into Challenger Deep more than 50 years ago, it was thought that the bottom of the ocean was a muddy, lifeless desert. But since then, we’ve learned that the reality is quite the opposite. Life thrives in our oceans, and if we could explore these seemingly alien worlds, we might find new extremophiles and unknown lifeforms. A prospect that has many scientists excited. 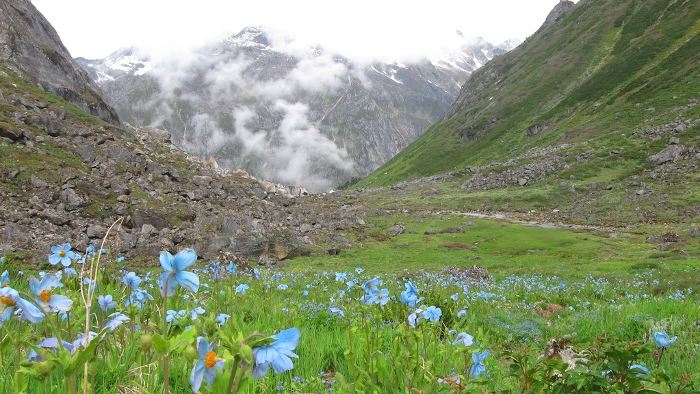 The Northern Forest Complex in Myanmar remains one of the largest areas of uninterrupted wilderness in South Asia, extending across lowland forests, and wetlands filled with coniferous trees (meaning they have scale-like or needle-shaped leaves). And just above the Northern Myanmar tree line are the majestic, jagged snow-covered mountain peaks.

The region boasts some of the greatest biodiversity in South Asia, many areas remaining virtually untouched by human explorers. It’s believed that numerous species of tigers, elephants, and birds make up a significant portion of that biodiversity.

The heart of the forest is nearly 13,679 kilometers and is the world’s largest tiger reserve.

Despite the relative scarcity of human life in the forest, about 1 million people live around the forest’s borders, living both inland and on the adjacent coast.

Though much of the forest remains under environmental protection sanctions, many of those sanctions are expiring, which some experts suggest could lead to disaster for the future of the forest complex’s continued biodiversity. Illegal animal tracking continues to be a problem, China being a major player in the trade of exotic animals taken from the area.

The Namibia Desert is one of the most hostile places to life on Earth, and it’s currently thought to be the world’s oldest desert. Because of the extreme heat and arid conditions, the region remains almost entirely uninhabited.

The Skeleton Coast is as deadly as it is beautiful, with white sprawling sands and shipwrecks from bygone eras littering its shores as if warning of the dangers the desert might contain should it be visited by unwary travelers.

Despite this, the Namib Desert and the Skeletal Coast are home to a surprising array of wildlife, such as baboons, leopards, cheetah, and brown and spotted hyena, and hippos have been spotted from time to time wading in the waters of the Skeleton Coast.

The only real traffic the area experiences is due to important trade routes. 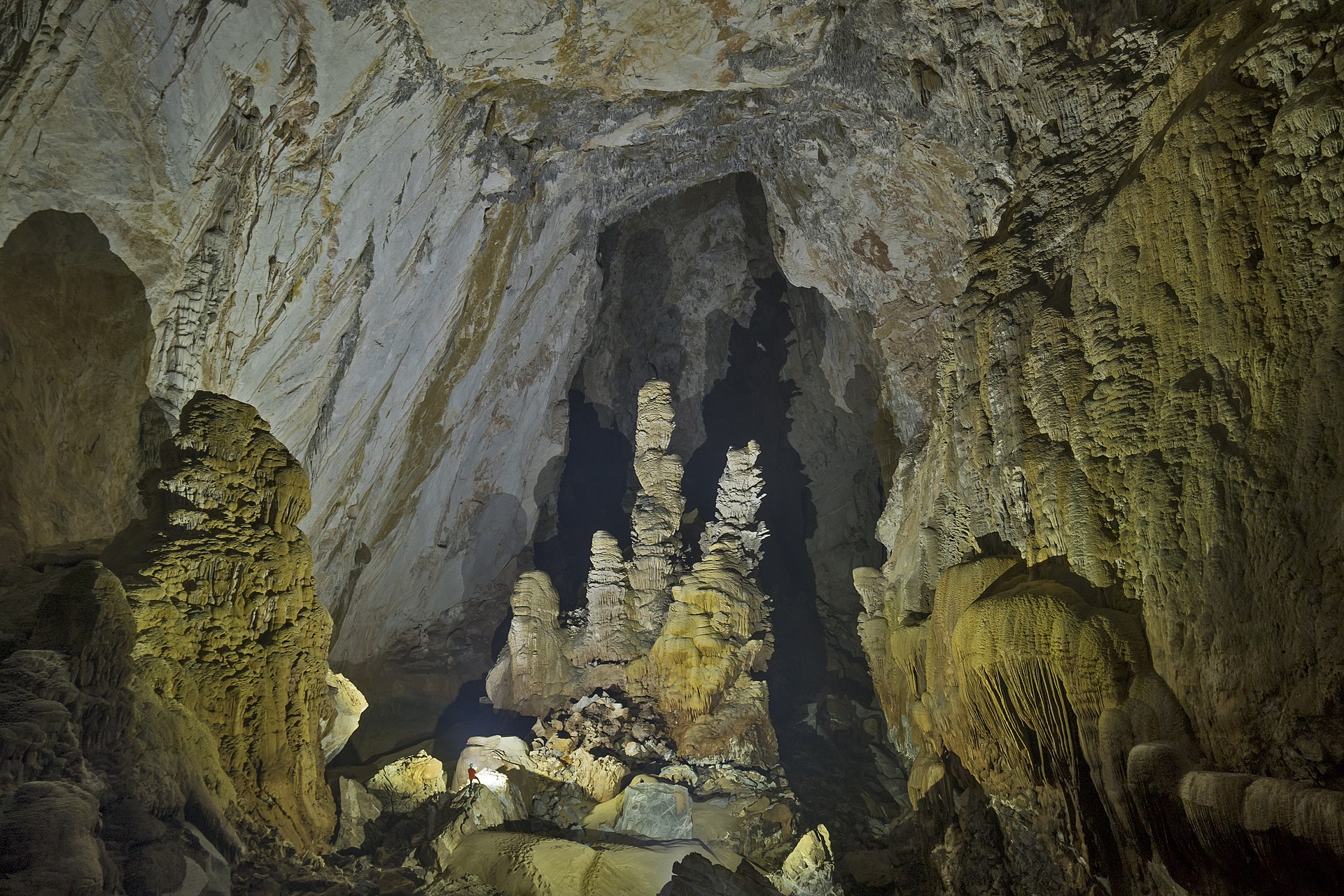 Hang Son Doong Cave was first discovered in 1990 by a local farmer named Ho Khanh, who was seeking shelter from a passing storm in the jungle. Ho Khanh noticed that clouds and the sound of a rushing subsurface river was coming from a massive hole in the limestone in the jungle. He survived the storm but got lost making his way out of the jungle, and the location of the cave was thought to have been lost for 18 years.

Fortunately for us, he rediscovered the entrance to the cave in 2008 while hunting. The cave is now thought to be one of the largest in the world, stretching an impressive five kilometers long and reaching heights of 200 meters. The first expedition to the cave, led by a group of UK divers, was unable to map the entire cave system, due to lacking the proper equipment to continue.

The cave is home to an impressively unique eco-system, featuring its own localized weather system. Extremely rare limestone cave pearls remain scattered throughout the cave, resting in dried pools, and it’s also home to the largest stalagmite ever discovered, measuring in at a staggering 80 meters.

Because of the delicate eco-system, people are not allowed to enter Son Doong Cave, and much of it remains unexplored. It is thought that the system could be even larger than original estimates suggested. 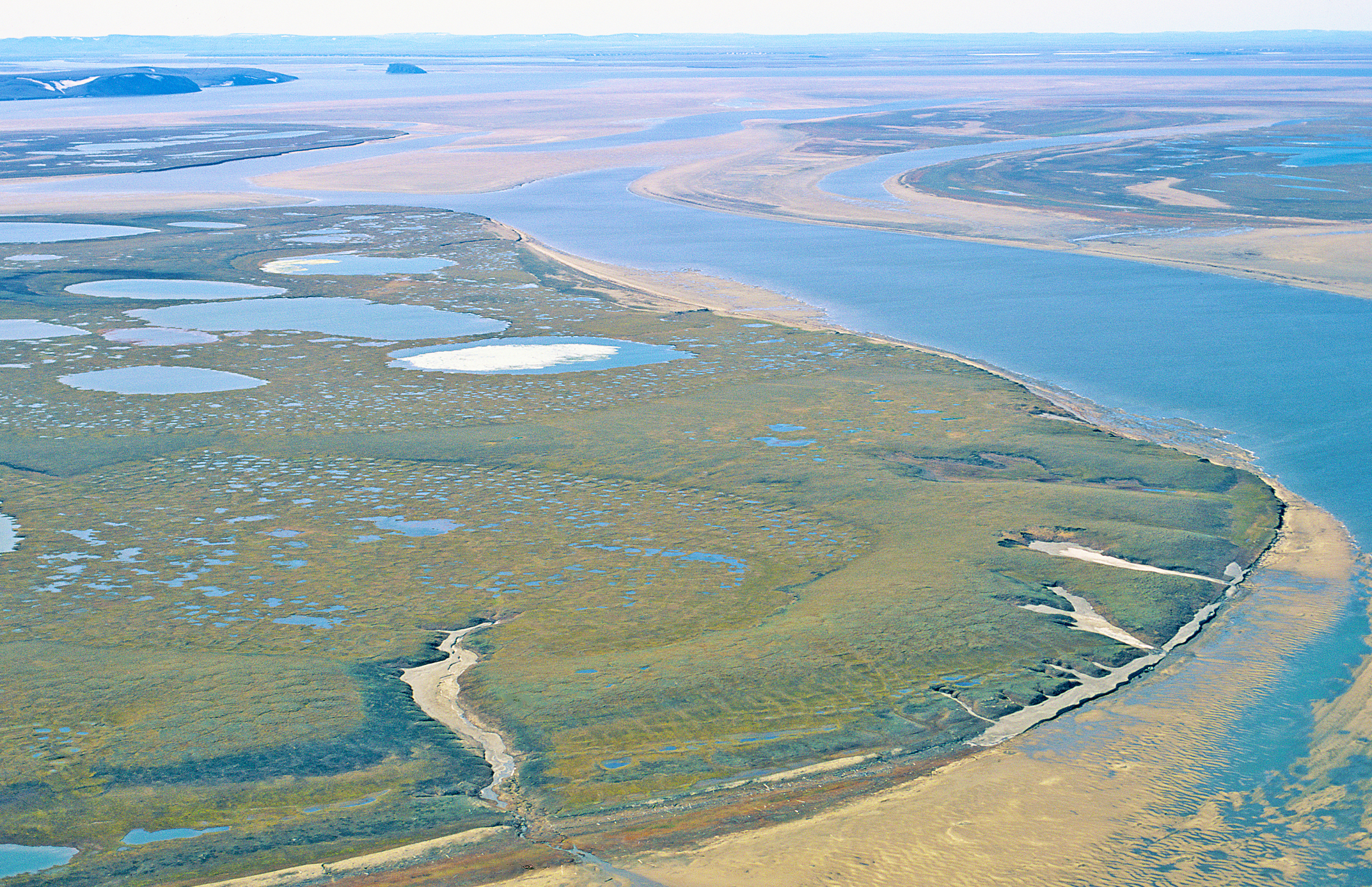 Despite being the largest administrative subdivision in the world, and the largest part of the Russian Federation, the Sakha Republic is a frozen wasteland, where ancient, extinct animals have long been preserved in permafrost. It gets as cold as -43.5 degrees Celsius in the winter, and only 19 degrees in summer. It’s one of the least populated places in the world, home to less than 1 million people despite being large enough to fit several countries inside of it.

Russian folklore tells that God flew over this immense expanse of frozen land, carrying Earth’s treasures, and because of the extreme cold, his hands froze, causing him to drop those treasures all throughout the Sakha Republic. The region is home to some of the richest deposits of natural resources, making up 82% of diamonds, 17% of gold, 61% of uranium, and 5% of iron ores in Russia.

Vast portions of wilderness in the Sakha Republic have been left completely unexplored by man.

Considered to be the world’s tallest “unclimbed” mountain by many, Gangkhar Puensum’s peak has never been scaled, and it’s unlikely that anyone ever will if the government has anything to say about it. The peaks of Gangkhar Puensum are sacred to the people of Bhutan, and it’s considered an extreme taboo for anyone to attempt to scale its slopes and peaks.

But ordinances and taboos can’t stop everyone, and since part of the mountain extends across the Chinese border, the first and only attempt to assail it was led by a Japanese climbing team in 1998. They were stopped short of their goal to explore the uncharted mountain by political fueled outrage from Bhutan.

The mountain remains untrodden by humans. 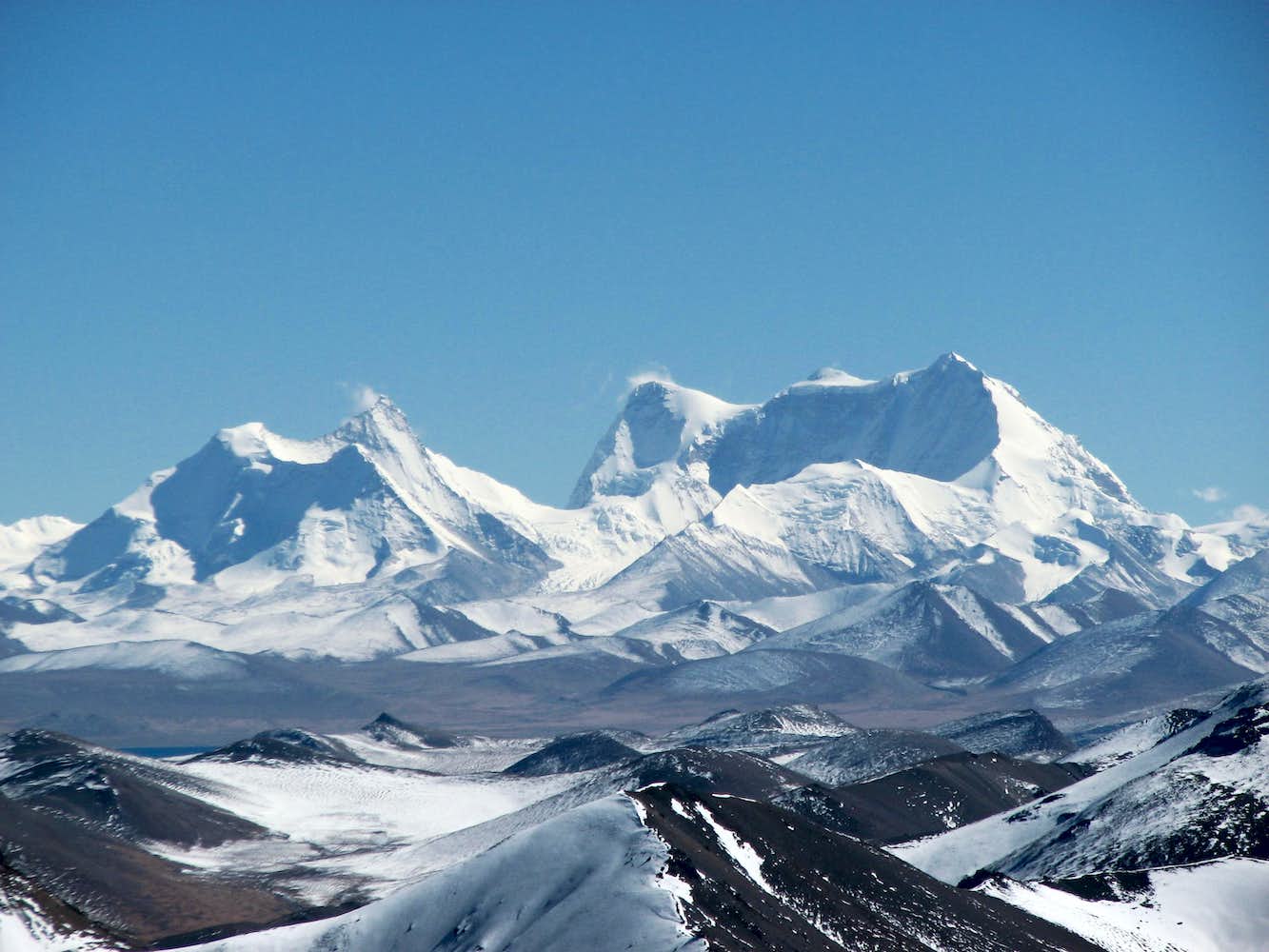 When viewed from a distance, Karjiang mountain looks like a taller, icy mountain was smashed in by an asteroid, creating a large crater around which the sharp, frozen peaks point inward. Like most mountains in Tibet, it’s an incredible sight. With a height of 7,221 meters, Karjiang’s first peak remains one of the tallest unclimbed peaks in the world.

The Karjiang mountain rests near the Bhutan-China border in the Tibet Autonomous Region.

The last serious attempt to reach its summit was by a Dutch expedition in 2001. At some point in their climb, the Dutch explorers had to turn back due to harsh weather conditions, though they did manage to reach an elevation of 6,820 meters, climbing Karjiang III, before retreating.

While Karjiang I remains indominable, Karjiang II’s summit was reached in 1986 by a party of Japanese explorers led by N. Shigo.

The difficult with Karjiang I is that its slopes are prone to avalanches and the ever-shifting weather patterns make it nearly impossible to predict what conditions will be present during an expedition. Greenland is the world’s largest island, and it’s home to stunning glaciers and ice covered mountains which stab up from the Earth like jagged blades. The country is recognized as an autonomous part of Denmark, and most of it is uninhabited, featuring less than 58,000 residents. Greenland’s untamed landscapes tell a story dating back nearly 3.8 billion years and the few travelers that are able to venture there tell of how geological time seems uniquely evident when looking upon the country’s vast glaciated peaks and immensely diverse landscapes.

In 2005, melting polar ice revealed new islands, which escaped categorization when Greenland was first mapped nearly a century prior. The discovery of new lands connected to the immense island is just one of many secrets which could be revealed if climate change continues unimpeded. Scientists are very concerned that global warming could lead to the melting of the glaciers which cover most of the island’s interior.

The country’s largest geological feature, the Jakobshavn Glacier, moves at an incredible speed of 30 meters a day, faster than any other glacier on Earth.

It’s thought that this ice sheet was the source of the iceberg which sunk the Titanic. The vast wilderness of Northern Patagonia is home to temperate rainforests, glaciers, fjords, and hot springs, and it’s one of Chile’s least populated regions. While the Los Glaciares Park in Argentina and Torres del Paine National Park in Chile continue to be tourism hubs, outside of that area the wilderness remains largely unexplored. As many of the tourist sites touting the desirability of the area for its appeal to outdoorsmen attest, the safety of the average hiker depends greatly on which trails they choose to take. There are vast regions so inhospitable, that even the toughest explorer might have issues navigating the terrain.

The area is only accessible by the Carretera Austral, the name given to Chile’s Route 7 highway.

The ice fields are so vast, in fact, that they’re comparable to those found in the arctic circle and prove incredibly difficult to map properly.