…“Well Earth has gone from pyramids & chariots to satellites & spaceships since then.”…

Two months later in their truly incredibly unlikely journey, following-up their ongoing “home schooling” of Deimostra, as a family they tackle the issue of just how they could exchange information with the Newfoundlanders. Simple drawings surely must be the most effective way to impart the essence of a civilization, but blank paper is unnecessary in a digital world; a challenge with a budding artist for a child.

“I told you not to launch all those message(s)-in-a-bottle to your mother,” Sampson jousts in his sarcastically upbeat style. “It just occurred to me that these people have already seen Egyptian artwork, so they already know something about us.”

“Well Earth has gone from chariots to spaceships since then.”

Another avenue of interaction, the recurring theme on the NEWFOUNDLANDER, is musical composition. Every single day of their 4+ year trek they encounter distinct individual tones, spanning six octaves in range, all of which seems to make their world move & shake in a unique and mystifying fashion.

“I will be sure not to hum the wrong song. Green Day may mean something degrading or vulgar,” he editorializes.

“Nothing we have heard is true “melody”, so thankfully my classical training may be useful.”

“Yeah, well if they happen to have 88 keys on some instrument, we can’t push our luck; Chopin and Liszt may not be their cup of tea, any more than Punk Rock is.”

At times, increasingly lately, she worries about Sam’s ability to take anything seriously. Every

conversation is an occasion for sharp and increasingly pointed wit. Some of it is genuinely funny and serves to ease the tension of deep-space flight, but on the other hand, much of the so-called levity is biting and coarse, the kind of stuff Sigmund Freud would have concerns about.

Celeste is not Freud, though even she had the skills for it, it is not a good idea to psychoanalyze, when you are not sure what the cure is. One thing she is positive about is that her Mission Commander has been overtaken by the impotent role he is playing in the course of the NEWFOUNDLANDER excursion. Perhaps she should have agreed to let him tinker with the navigation, but at the time, it made sense to take the careful course of leaving well-enough alone. 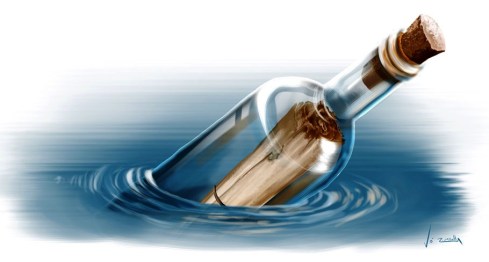 Message in a Bottle by jrivadulla deviantart.com