The NEWFOUNDLANDER continues to hurtle toward the planetary system which must surely be their final destination. The ship with a remote control mind uses all the right moves on its approach, like it had done this very move before. A skilled navigator himself, Sam

sincerely hopes so, because he is beginning to feel uneasy with the speed at which they going at this late stage. That scary mega planet is looking large and larger, its red-hot surface churning like the gates of hell… and they have barely dipped below SOL.

Born to go fast and built for speed, Sampson and Celeste are in white-knuckle mode, each in their own way, praying that the NEWFOUNDLANDER would slow down! Imagine being a passenger in an auto without a steering wheel whose brakes have failed and that would pretty much sum up the situation.

Little do they realize that due to the orb’s enormous mass, the illusion of proximity is just that, an illusion? At a half a million miles out, the stardrive that had relentlessly propelled them past several other stars without a pit-stop begins to back off, freezing the white dots of light behind them. An example: Earth’s sunlight will catch up to the Epsilon Eridani solar system in another year or so.

They are relieved when their space-taxi whooshes past the ominous molten maelstrom and subsequently an uninviting barren exo-world that looks like it would make a great prison planet. Once the sub-light deceleration has taken full effect, and you can 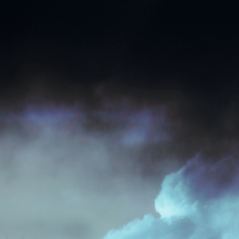 The only possible landing point is the third largest member of this unique triumvirate, a misty looking sphere, the size of which is hard to judge. There are no clues as to what lays beneath the cloaking shroud; no hints to its close-up appearance.

Instead of knifing through the planet’s pea soup ionosphere, to allow that anxiously awaited first glimpse from on high, the NEWFOUNDLANDER nestles into an orbit above the vaporous barrier.

What lies beneath the clouds & mist?