…Speaking of supposed-to-be’s {what-ifs and cold days in hell}, President Harper Lea Bassett is closing in on the would-be festivities…

“Take it easy, Fletch. While I was poking around in there last night, I discovered that SEx can achieve escape velocity on its own. The reinforced hull, along with the

molecular stabilizer, will allow Gus to take that baby out solo.”

The youngest McKinney {that Earth knows about} is suiting up as he speaks.

“Somebody please inform our President about the change in plans, after the fact.”

“I know what you’re thinking. We are going to show file footage of the boys inside SEx. Nobody will know the difference.”

“But what about taking off without a piggyback? Somebody is going to notice.”

“Gus is going to be past the moon before anyone knows he’s off the pad. We’re all supposed to be on the receiving stand, isn’t that correct.”

Speaking of supposed-to-be’s, what-ifs and cold days in hell, President Bassett is closing in on the would-be festivities. Few things are more important to a figurehead than advertised appearances. There was a “leak” a week back {not weak back} about her welcoming the heroes of hyperspace in person. She has long since laid claim to bringing SOL technology to the light of day, when in fact it is only her pen and the insistence of her political backers that are truly responsible.

“Where are our men-of-the-hour?” is the most asked question.

“This guy Shriver is being a leaky O-ring,” is how Francine Bouchette-Crippen describes him, for everyone in the inner circle with an earbud. She is not as cranky as her husband, but at their station in life, they don’t suffer fools lightly.

All Prez Roy does is point to the unique contrail left behind by the Stellar Explorer. He makes up a non-treasonable explanation, “There they go, Madame President. We wanted to give you a live demonstration. How will that play in D.C.?”

To support his elaborate smokescreen, he summons a video of Gus and Deke waving to the camera, curiously resembling the one from their original roundtrip to the fringe of the solar system – and back – mostly {before Deke vanished}. The screen behind the reviewing stand is innocently playing that recording and another showing long-range footage, which elicits rousing applause from all the space-geeks and political freaks who would not know the difference between an asteroid and a comet. 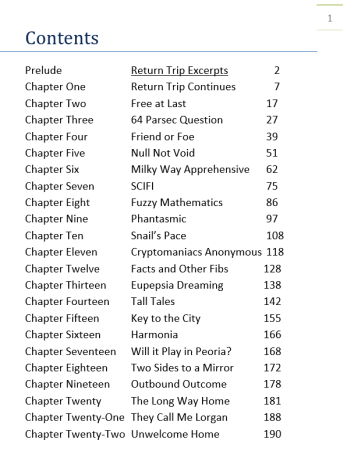