The Seljuk have their hands full their own selves. 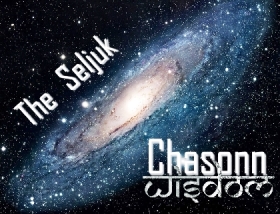 Not only is Chasonn the inspirational head of this stalwart star system, he is old enough to remember the hard times; when the Triangulum Galaxy was not such a peaceable piece of their quadrant.

His current concerns are more than justified.

Are his eyes-to-the-skies watching what is going on over in the Milky Way, that relatively primitive galaxy that looks to be on the rise, with all its impactful goings on? – Hardly.

Three Seljuk outlying planetary outposts are now incommunicado, but not before reporting a wave of bright light.

Complicating the situation is the sighting of a single shiny planetoid O which seems to position itself wherever it pleases. Could it have anything to do with recent bad happenings? A quick check of planetary logs reveals that it has been here before. But before anyone can get a clear fix on it, it decides to vanish.–

— The last time something bad happened in this sector was when a younger Chasonn was studying to be… well he didn’t know what he wanted to be. One thing for sure, he had no intentions of following in his father’s footsteps. There is no reward in being a political figurehead in these parts. In fact there is peril his family’s altruistic efforts.

He was away at university when every Seljuk leader was whisked away, never to be seen

Who would neuter a people-group by taking away their governance? The Ÿ€Ð, they would come to find out. In a heretofore unheard of tactic, the Ÿ€Ð strategy of conquering, a particularly insipid one, centers on removing the wisdom of their targets and they are good at it.

But in the centuries since, the Seljuk successive hierarchy has instituted measures to defeat that particular tactic. Chasonn’s present stature is testament to simply filling a void, an essential need for his people.

In Chasonn’s mind, there are no buts about it, this has Ÿ€Ð fingerprints all over it. In his

subconscious is the hideous taste left behind in their criminal wake. It took 150 years for the Seljuk to literally grow up new leaders, but the goal of comprehensive exploration of the Great Expanse came to a cruel halt. Without long-range vision, they were coerced into provinciality; the Ÿ€Ð like it that way.

The easy thing to do is to blame the usual suspects. The hard thing will be determining the truth. And the truth is out there.–