…Aw heck, Judith, you know I’m just a small town paper guy. I am grateful for any scraps you send my way…

“Now that was one hell of a picture!” asks Harv Pearson of Judith Eastman. The two of them have been literally attached at the hip since their serendipitous meeting. Together they are

taking photographic journalism to another level. Pictures taken at the Pan-American Exposition are gaining form in one of the three baths of liquid in this very dark room. A dim red bulb allows them to see their work, but little else.

“I was actually setting up for John Philip Sousa. When I heard the shots I turned the tripod, approximated the angle and snapped.” The President had not reached the ground in the aforementioned image; a moment frozen in time, for human eyes to see, now and forever.

“You do realize that you have a pretty good look at the gunman…..here?”

“I thought so,” Judith agrees, “though at first that bandage on his hand looked like real wound dressing”

“So, how many duplicates does this make?” This particular picture is in great demand, making Judith an Eastman known in her own right. She is not exactly Matthew Brady, but neither is he and dying in a charity ward like him is not in her long-range plans.

“Ten, but do you remember what a time we had getting the government to release it for publication?”

“Don’t remind me. All my articles on the assassination ran with file photographs of McKinley.”

“Well, how soon we forget,” she quips with mock indignation.  “What about all the other pictures of the Exposition, including everyone and his brother with the President! Were they but chicken feed to you?”

Harv does his best backpedal, lest he be banished from her good graces. He can ill-afford to lose either her technical skills or her friendship, especially since he is not far from expressing his undying love for this incredible woman. If you throw in the national magazine the pair is envisioning, he cannot let professional considerations to be divisive.

“Aw, heck, Judith, you know I’m just a small town paper guy. I am grateful for any scraps you send my way.”

“Don’t give me that poor old country boy routine.” She parts the dark to embrace him, fully appreciating that authentic charm. His nose for news and unfailing loyalty do not hurt his chances either. “Hurricanes and assassination and who knows what else have given you the most respected by-line I’ve seen in years. Your name has been mentioned in the same breath with Horace Greeley. Small town, my eye!”

…Ziggy Endlichoffer and Alpha Campbell are brushed aside, in favor of so-called experts, as if they were a nuisance, not lifesavers…

“Stay still, sir,” implores Ziggy, who is busy plugging the torso breech with the cleanest handkerchiefs he can find. Alpha calmly assists his mentor, having learned that grace under fire is the doctor’s best friend.

“There is an ambulance on the way!” updates a very concerned Exposition official.

“No!” Ziggy protests. “He should not have a bumpy ride. Ve must stabilize him before he is moved; I think zee bullet is near his spleen!”

By now a circle of lawmen, some local, mostly Secret Service has made a pretty tight circle around McKinley’s prostrate position, with an eye out for the ambulance wagon. Anyone on the outside of this enclosure can only guess as to the condition of the man whose health they fear for.

There is an absence of the normal buzz generated by several hundred people. Stunned shock replaces it. Phoebe Love, with her husband nearby his wounded friend, chooses to do the perfect and only logical alternative to grief: prayer.

“Come near, my friends,” she beckons her known confederates, whose numbers grow upon hearing, “Our dear Heavenly Father, we come before you, broken and miserable sinners, to worship and adore you and ask for your divine healing for your devoted servant, William McKinley. Lord, he lay bleeding from a bullet delivered by one of Satan’s own. Please take him into your loving arms, show him that love, and give him a peaceful spirit, free from despair and pain. May it be your holy face he sees?

“We also want to bring his sweet wife Ida before you. Guard her from the fear that will soon come to visit. Give her no reason to grieve prematurely, soften this cruel blow in ways that we your people can only marvel at.

“Father GOD, make us a people who love and serve you in all the things we say and do; mere players in your grand orchestral plan.

“And all His people said……”

“Amen!” rolls like thunder across the plain of souls. 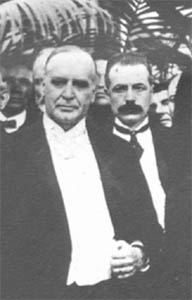 “Cortelyou–my wife–be careful how you tell her–oh, be careful.” This is an instant where he cannot effectively protect his frail spouse, fearing not for his well-being, but that of Ida.

“Yes, William, I will be gentle,” promises his attending secretary.

“If you insist on taking him on this monstrosity, let us attend him.” Ziggy Endlichoffer and Alpha Campbell are brushed aside, in favor of so-called experts, as if they were a nuisance, not lifesavers.

“Thank you, friends,” is all McKinley can say from on the stretcher, powerless to overrule a situation he cannot control.

A pall is cast upon such a promising September day in the first year of this new century. One career is ended as another is just beginning.

William McKinley has a prohibitive favorite in musical style: ragtime. The “King of Ragtime”, Scott Joplin is here to perform, as he had at the Chicago Exposition in 1893. You do not turn down a request by the president, who is treated to the recently composed, “Maple Leaf Rag”, among other many jazz favorites in this singular format.

Mister Joplin finishes this afternoon’s program to a large ovation from the several hundred fair goers. The concertmaster thanks everyone for coming and invites one and all to greet the President at a public reception commencing hence.

“Where should we go now?” asks James Ferrell, whose youthful curiosity is fueled by what amounts to a vacation for him, in the midst of virtually two solid years of university study. There are so many wonders that titillate each of the five senses and not enough time to take it all in. “I want to see the racing cars.”

As you would think, there is no consensus among the Floridians, who struggled to amass themselves here. They had been scattered for the entire morning, in pursuit of their diverse interests and separate ways it seems to be now.

They are in their indigenous groups, however. The Ferrells are not about to waste a minute of their rare together time, as do the Campbells and the Endlichoffers, even though Amanda Campbell is distracted from missing the two children she left behind in Tallahassee, in the care of Princess Olla; freedom brings on new, if not worrisome, sets of dilemmas.

Just as their milling and mulling comes to an end, heads are turned by what sounds like firecrackers. Two pops precede gasps and screams. Someone yells, “Get a doctor! The President has been shot!”

Herbert Love was close enough to feel the shock waves from the pistol reports, he searches the crowd, searching for answers to the doctor request and is relieved to see Ziggy dragging Alpha through the gathering throng, turned angry mob.

“Am I shot?” the slumping leader gasps, not feeling the pain or the stream of flowing blood.

By this time the mob has tackled the assailant, beating him mercilessly. “Let no one hurt him.” McKinley orders in fear of vigilante justice.