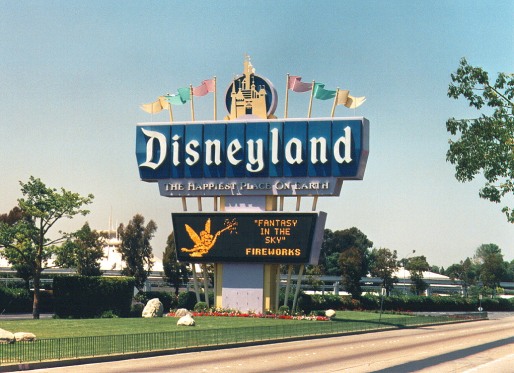 Walt Disney opened Disneyland in 1955, and since then, the corporation has only grown its park locations all over the world. Over 20 million people visit each of these locations every single year. So, it only makes sense that in order to keep these Disney fans coming back, improvements need to be made to the park rides and attractions. Here are 10 attractions that simply did not make the cut.

When you think of Disneyland, you probably don’t think about nightclubs. During the 1980s, Michael Eisner, the CEO of Disneyland decided that he wanted attractions that would appeal to local teenagers. At the time, season passes were only $40 all year, or $35 during summer break, with a student ID. This meant that local teens could visit Disneyland every night of the year to dance to music videos and live bands. There was even a TV show on The Disney Channel showcasing Videopolis. They also hosted a televised event called Disneyland’s Summer Vacation Party, where Disney mascots danced in the audience with the teens while listening to the very ’80s bands, Oingo Boingo, ELO.

This teen dream came crashing down, when a 15-year-old died from getting shot in the parking lot of Disneyland in 1987. For years, Studio K at Knott’s Berry Farms in Anaheim, California hosted dances every night, and it was a go-to place for high school kids, since admission was free. Disneyland quickly became designated as the place for “rich kids” to go clubbing, since it cost $40 to get in. With inflation, that is closer to $92 today, which most parents could not afford.  Local gangs decided to wait out in these parking lots, because it’s safe to guess that they were selling them something to help enhance their Disney experience, if you know what I mean. Disneyland quickly realized that this nightclub didn’t exactly align with their family values, and decided to end Videopolis in 1989. Today, the theater is used for family-friendly performances.

This ride was a collaboration between Disney and Turney Classic Movies at Disney World in Orlando, Florida that began in 2015, and expired in 2017. Guests sat in a car that was guided through sets that were made to look like classic movies like Singin’ in the Rain, The Wizard of Oz, The Public Enemy, and Raiders of the Lost Ark. They were all complete with their own animatronic “actors” that play out famous scenes. Audience members sat in a moving car for 18 minutes.

While the ride was iconic, the movies that were included may have been unknown to young children who were visiting Disney World. Surely, Turner Classic Movies was hoping to entice people to tune in to watch these classics, but maybe they didn’t get the views they were hoping for. The attraction is being replaced with Mickey and Minnie’s Runaway Railway, which combines an animated film and real-life changing sets. It truly does look like it will be stunning, and it is officially scheduled to premiere in 2018.

8. The Peoplemover and the Rocket Rods

In the 1960s, Tomorrowland was a showcase of how Disney Imagineers saw the future. One ride that guests absolutely loved was called The Peoplemover. Slow-moving cars go along tracks that are built throughout all of Tomorrowland. The ride never stopped, and people got on and off so efficiently, that there were never a very long line.

When they revamped the look of the Tomorrowland park, they decided that the Peoplemover just wasn’t “cool” enough for their new style in Disney World Orlando. They kept the old tracks, and added a new ride called The Rocket Rods. Each rocket-shaped vehicle could only take a few people at a time. The ride sped up, and then slowed down at every turn. Wait times in line were nearly two hours long, and guests were very underwhelmed by the entire experience.

Not only was the concept a bust, but only a few weeks after opening the ride, it had to be shut down for three months of repairs.  Even when it reopened again, the ride needed to be shut down for repairs at least once a day, and the concrete tracks supporting the ride were beginning to crumble. In the year 2000, the ride closed down completely, but the tracks are still there, gathering dust.

In order to celebrate the upcoming Bicentennial 200-year anniversary of The United States, Disneyland opened the attraction America Sings in 1974. It was a musical show set on a rotating stage. Animatronic animals moved along with a recording of songs from American history. Once the song was done, the stage would move, and new animatronics would appear.

After only a few months of the attraction’s existence, a young woman named Deborah Gail Stone was working at Disneyland part-time as a hostess. She leaned back in her chair while the rotating stage was changing, and it crushed her head. Deborah’s family tried to sue Disneyland for their daughter’s death, but they lost the lawsuit, because leaning back in her chair was against safety procedure. The attraction continued for over 10 years, but since it was really meant to celebrate the Bicentennial, there was no need to keep the creepy robot party going for so long. It eventually shut down in 1988, and it was never reopened.

The ride Superstar Limo put park guests in the position of being the hottest new Hollywood star. A moving car begins at the Los Angeles Airport, and makes its way through famous locations, past some caricatures of famous movie stars like Whoopi Goldberg, Cher, and Tim Allen, and ends at The Chinese Theater.  The artistic style looked more like scene out of Who Framed Roger Rabbit? than a Disney park ride.

It opened at Disney’s California Adventure in 2001, and while some people enjoyed it, the majority of guests were confused. Some people were downright offended, specifically because the ride actually recommends getting tattoos, which is understandable troubling for some parents. In fact, Superstar Limo got such a negative reaction from local newspapers and park guests, that it was closed down after less than a year.

The Maelstrom ride took guests on a viking ship, floating past characters from Norwegian folk tales and legends, including a three-headed troll, a sea dragon, and…polar bears? It ends with guests walking around an indoor replica of a Norwegian fishing village. There is a 5-minute long movie at the end called The Spirit of Norway, which gave an overview of what life in Norway was like.

It opened in 1988, and lasted until 2013, when Disney released the plans to rehabilitate it into Frozen Ever After. Considering that the locations in the movie Frozen were inspired by Norway, the boat and the surrounding theme did not need to be changed very much. The Fishing village became the town square of Arendelle. Guests still board a boat, only this time, they see animatronic characters from the Frozen movies. The technology used in both rides is relatively the same, but the guests are far happier with Frozen Ever After than they were with Maelstrom.

There was a section of Disney World’s Epcot called Wonders of Life pavilion that was built to educate people on the human body, and encourage health and fitness. It was completely sponsored by MetLife Insurance, who paid to have their company’s name plastered everywhere.The most popular attraction in The Wonder of Life was Body Wars.

Guests were “shrunk down” inside of a ship, which moved as they watched a film about a group of scientists exploring the inner workings of the human body. The film was directed by Leonard Nimoy, the actor who played Spock in the original Star Trek series. So, it’s no wonder why it was successful.  While there were plenty of other things to do at the Wonders of Life pavilion, Body Wars was by far one of the go-to attractions in Epcot in the late 1980s and early 1990s.

When Disney lost their partnership with MetLife, the attraction slowly began to lose more and more of its sections, due to the major budget cuts. Eventually, the Pavilion was converter for the annual Food and Wine Festival.

In the 1950s, submarines were still a very new technology, and the public was fascinated by them. So, it only made sense when Walt Disney wanted to include Submarine Voyage in Tomorrowland. During the 1960s, they even hired local teenage girls to swim around as live mermaids. The mermaids were obviously the most popular part of the attraction. According to former park employees, people would throw money out to the mermaids as tips, and one time, a young man from the Navy jumped into the water so he could swim out to their tanning rock to hang out with the mermaid girls. Security eventually had to fish him out, of course.

The park eventually realized there were multiple safety issues with the mermaids, including the fact that many girls say they could feel themselves getting sucked into the propellers. They were no longer part of the experience in 1967. The ride lasted until 1998, when it was eventually shut down. In 2007, it was reimagined as the Finding Nemo Submarine Voyage.

The “ExtraTERRORestrial Alien Encounter” – or Alien Encounter for short – was an attraction in Walt Disney World park in Orlando, Florida. The storyline of the attraction surrounded an alien corporation called X-S Tech. The ride used air, lights, and surround sound in the seats to scare guests into believing that an alien monster had escaped inside of the room.

Adults and teenagers loved this ride, and it gained a true cult following of fans who revisited the ride every year. However, it made many parents angry, because they believed it was far too scary for kids. The ride ran from 1995 to 2003, until it was shut down, and reimagined as Stitch’s Great Escape.

At Big Thunder Ranch, the most exciting thing you would find was… a cow. Yes, a cow. Its name was “Micky Moo”, because of the Micky-mouse shaped patches on its fur. The attraction was built in 1986 as a Western-style petting zoo and Barbecue restaurant. There was an old fashioned blacksmith demonstration, but beyond that, there wasn’t much to do at Big Thunder Ranch.

In 1998, the space was renovated into The Hunchback of Notre Dame: Festival of Fools. Strangely enough, they brought Big Thunder Ranch back in 2004, only this time, characters from the not-so-popular Disney movie Home on the Range was incorporated, so at least the second time around, it made a little more sense. However, it was closed down a second time in 2016 to make way for Star Wars Land. Which, we can all agree, is probably going to be a slightly more popular attraction.