“Damn everything but the circus!. . .The average ‘painter’ ‘sculptor’ ‘poet’ ‘composer’ ‘playwright’ is a person who cannot leap through a hoop from the back of a galloping horse, make people laugh with a clown’s mouth, orchestrate twenty lions.”

“Something about the circus stirs their souls, and they ache for it when it is absent.”

“The circus collects the outsiders like a flame tempts moths.”
― Laura Lam, Pantomime

“So the carnival steams by, shakes ANY tree: it rains jackasses.”
― Ray Bradbury, Something Wicked This Way Comes

“In Russia I went to a great yeshiva, and in America I work in a carnival.”

“The speech fascinated him. His ear caught the rhythm of it and he noted their idioms and worked some of them into his patter. He had found the reason behind the peculiar, drawling language of the old carny hands—it was a composite of all the sprawling regions of the country. A language which sounded Southern to Southerners, Western to Westerners. It was the talk of the soil and its drawl covered the agility of the brains that poured it out. It was a soothing, illiterate, earthy language.”
― William Lindsay Gresham, Nightmare Alley 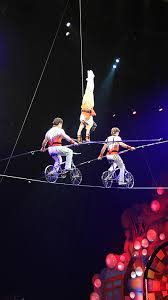 Waiting ahead is quite a pair. Circuses and carnivals are popping
up all over the South, as they have in New York, Saint Louis, and
Montreal having been born in Europe. Two of The Flying Bleakers,
a Slavic family of acrobatic proportions, is manning mile four. The
oppression they had fled in the “olde country” is a whiter shade of
prejudice than here in Florida, but just as, if not more dirty. The ethnic
cleansing that they and their ancestors have survived or participated
in for more than four centuries inspires them to lend their unique
skills to right the wronged.

On a still, quiet night like this, the steady trampling of six pairs of
feet is easily detected. The Bleakers celebrate the coming Campbells,
eagerly cart wheeling to the task of escorting them across the trestle
that spans the Little River gorge. One quarter-mile across and 100 feet
down, the watershed which feeds the larger Ochlockonee aquifer
may scare the average person, for these men who dangle and fly for
a living (with the greatest of ease), the dizzying height is nothing at
all, even in the moonlight.
Darkness conceals the river below, making it appear to be endless
space, without mass or ditch or anything that will stop an object straying
from the rails. But it is there and gravity is waiting to take over.
Stage four, the most dangerous of the five, is in good hands.
Footsteps are rhythmic and sure with half of the span negotiated. Even

the Fabulous Flying Bleakers Brothers sense the mythical “finish line”,
the end of the trestle where they will not likely be followed. Agnes
and Francis cover their eyes and sort of bravely ride the shoulders of
their daring escorts from a far off land.

But before long, optimism turns to panic. At first, a distant rumble
is heard. There hasn’t been buffalo in Florida even before they were
nearly wipe clear of the planet.
The wooden structure starts to vibrate. There are no earthquakes in
Florida, though there are a few old-timers who remember a shaker late
in 1811, distant resonance from the Missouri and Ohio River valleys.
A plume drifting past the sinking moon settles the matter; that
rising cloud of ash and dust smoke can only be one thing; the
unwelcome signature of the Midnight Express.
The hard charging mass of iron and steel travels at speeds
exceeding 50 miles per hour and closes in on the trestle in no time. A
quick assessment of their status is not good at all. Amanda Campbell
joins Willy for the final 300 feet, his strength will them carry the
day. Hosea tries to keep up, but his unsure feet slip between timbers.
The Bleakers must put down the girls to free his wedged right leg.
Screaming the whole time, his leg is loosed, his shoe remains.
The locomotive continues to close.

“I told you this was fun! When the true fiction in me kicks in, you can through reality out the door!”