The Industrial Age saw the formation of many new technologies that would change the face of Great Britain and the world. From deeper coal mines, dirty factories, to the advent of the steam engine and canals, here are 10 fascinating facts about the Industrial Age.

It’s widely thought that the Industrial Revolution began in Britain, thanks to its status as a global trading power. By the mid-18th century, inventions like the flying shuttle, the spinning jenny, and the power loom increased the production speed of England’s textiles, requiring less manpower and time.

This explosion of new manufacturing capabilities also helped to further Britain’s imperialist goals, while their new textile production capabilities helped supply British colonies, where clothing and other goods were in high demand.

Among these new advances was the smelting of iron ore with coke (not that coke!)(or that one either), a material which was made from the heating of coal. This was a major step up from the old way of smelting, which utilized charcoal during the process, proving to be a much more efficient and cheaper means of production that also yielded stronger materials. As a result of this increased demand, mines had to get deeper, and consequently more dangerous to the miners who braved their depths. Miners had to worry about gas flooding, which would cause an entire mine to explode just from a single strike of a pickaxe, as well as poison gases, and collapses.

Coal, however, was extremely expensive and difficult to move, forcing entire towns to set up around mining operations. This created issues with how mining towns developed further, as no planning or forethought was given to what facilities miners and their families might need. The first true factory was built by Richard Arkwright in Cromford, Derby, and its construction would help launch the Industrial Revolution and change Great Britain forever. Not long after its construction, it ended up employing more than 300 people, something which had been unheard of as the domestic system only required a few people to work from home. Arkwright’s patented spinning frame sped up the production of textiles by leaps and bounds.

The factory employed mostly unskilled workers, except for a few engineers. In the domestic system, workers could set their own hours and enjoyed a great deal of flexibility, but in this new factory, workers were governed by the clock and strict factory rules.

But despite the strict working conditions in factories which sprang up after Arkwright’s, weavers were well paid, and by 1850, more than 250,000 unskilled laborers would be employed.

But, for all the benefits factories offered, they were run for profit, and safety precautions were hardly a concern for owners. Clothing in the mid-1800s was fairly loose, and an obvious danger while working Arkwright’s spinning frame.

7. Migration of People to Cities Rural communities saw mass migration of people looking for wage-based jobs in big cities like London. In fact, by 1850, over 50% of Great Britain’s population lived in cities, rather than rural communities like the mining towns that fed their coal demand. Part of this is due to a dramatic reduction in the death rate. The bubonic plague all but vanished during this period, and the hunger which left so many people vulnerable to disease was also alleviated, allowing for a population explosion in Great Britain, Germany, and many other countries.

The politics of the time had changed drastically from previous eras. It’s strange to think that there was a time when people weren’t free to move where they liked, but in the feudal system and to some degree the domestic system, this was often the case. Additionally, the tolerance of religions not connected to Christianity and the Catholic church was growing.

In the United States, an increase in demand for workers since the abolishment of slavery saw people from countries who feared social unrest from their proletariat migrating as well, and indeed, even in the US city populations grew.

But as a consequence of this explosion of population, other countries feared that socialism would rise, and from that fear came the nationalist ideology which would lead to the start of World War I. 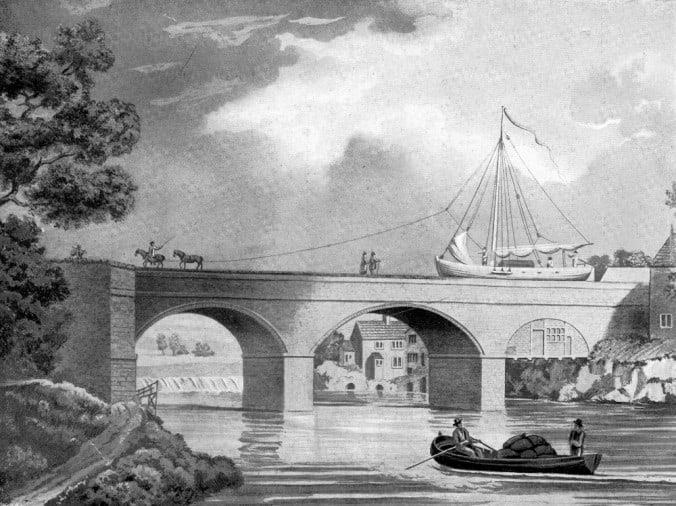 The advent of the market demands of the 19th century forced factories and mining communities to devise a method of shipping massive quantities of goods and food in a way that was both quick and efficient. Roads at the time were little more than tracks and could not support the forty-ton loads that most barges could support utilizing the canal system.

Canals were dug by men and filled with water capable of supporting barges. Perishables needed to be shipped quickly, and the growing canal systems allowed for this to be accomplished.

By the end of the 19th century, Britain would construct the largest ship canal in the world, known as the Manchester ship canal.

Before the Industrial Revolution, the rich were often born rich, and the poor rarely rose in station. The introduction of the canal system completely changed that, providing jobs and creating entire industries.

Shipping goods via canals did have its problems, though, and these problems would see their popularity and demand fall. For one, they would often freeze during winter, and during the summer a canal could dry up completely. Foods that spoiled easily couldn’t be shipped via barge, too. By the 1850s, railways began to take over as the dominant shipping method in Britain. Before the Industrial Revolution, some scientific ideas were simply off-limits. Britain had a major advantage during the 1700s and 1800s over other countries in that it did not censor the exchange of scientific ideas.

Though the importance of this attitude on the continued industrialization of Britain is contested, the development of the steam engine and the improvements made to it would not have been possible without the free approach to the sciences in the 1700s and 1800s in Britain. Industry also greatly improved the rate at which science expanded.

It is somewhat remarkable to think that not long ago we once thought our Earth was the center of the universe, and the Milky Way the only galaxy.

It was also during this period that the laws of Thermodynamics were established, as well as the beginnings of what would lead to the atomic age, and it can be argued that these advancements helped pave the way for the second Industrial Revolution which would dominate the early 20th century. Thanks to the advances in production methods, for the first time in history it became possible to mass-produce goods. In previous eras, clothing and other textile products were typically only produced locally, but during the Industrial Revolution, mass production allowed for entirely new business models to be tested around the world.

However, this also meant that much of the work done was now being governed by a crude level of automation (at least when compared to the automation of today) and workers in factories lost the connection they once had to the consumer buying their products. This also meant that workers would have little idea of what impact their work had on the final product.

Food and other perishables before the Industrial Age could never have been shipped as efficiently or quickly before the development of the steam engine or the creation of canals, a thing which was virtually unheard of in the Domestic System.

3. The Rise of Steam In 1698, Tomas Savery patented a pump with hand-operated valves which was meant to raise water through suction produced by condensing steam. Around 1712, this design was refined by Thomas Newcomer, into a more efficient steam engine, and in 1765 James Watt improved these designs even further by adding a separate condenser to avoid temperature extremes in the cylinder. Watt would continue to add onto the device, and its final form would essentially be a portable power plant.

It can’t be stressed enough how important the steam engine was during the first Industrial Revolution, and the use of steam engines became widespread throughout the industrialized world, being used in factories, trains, and ships, and allowing for far more automation than was possible before its advent.

In fact, it’s thought that without the steam engine, many of the advances made during the Industrial Age would not have been possible, especially when it comes to automation and improving the speeds at which trains and boats were capable of traveling at.

2. The Cost of Pollution Despite the advances in technology and automation and the ability to mass produce goods, these advances took a huge toll on the environment. It’s estimated that pollution in the cities of Manchester and Leeds skyrocketed by nearly 40% in just one year. Despite the use of drainage systems in some cities, the disposal of human and animal wastes was extremely primitive, leading to a whole host of public health hazards.

Due to so many factories utilizing coal to power their steam engines, the air quality in many cities took a sharp dive, and water supplies meant for consumption by humans were sometimes used to drain human excrement from beneath buildings, forcing the population of cities like London to drink contaminated water, leading to massive outbreaks of cholera.

Cholera is an extremely fatal disease caused by bacteria in water supplies, and still kills thousands of people every year in undeveloped nations.

But cholera wasn’t the only disease running rampant through crowded cities in the Industrial Age, poor hygiene caused by cramped living conditions and a lack of access to clean water led to outbreaks of Typhus and Tuberculosis, with the latter being one of the most deadly diseases of the time. From the 19th to the 20th centuries, cities exploded in size and population, and new technologies altered people’s lives even further than the advances made in the first Industrial Revolution. The incredible development of steel, ceramics, chemicals, and electricity harnessing devices all served to change how the world worked, and people found their lives being governed by the clock rather than the flow of day and night.

But as with the prior Industrial Revolution, child labor and appalling factory conditions continued to be a problem, and in some cases worsened. This would eventually lead to the formation of unions and the banning of child labor.

Many of the technological advancements made during this time were directed toward warfare, and all kinds of household goods like soap and butter stopped being made by households.

While some historians quarrel over when exactly the second Industrial Revolution started, its impact on the world cannot be understated. Many of the advances made during this time had a profound effect on the world we live in today.

Where Pollution Got Its Start