Whifflers and whiffling Following last week’s piece, readers noted some of the many situations in which these agreeable words appeared. Several pointed out that I’d not mentioned perhaps the most famous use of the word in literature, in Lewis Carroll’s poem from Through the Looking Glass, in which you may recall that

The Jabberwock, with eyes of flame,
Came whiffling through the tulgey wood,
And burbled as it came!

Lots of others mentioned the game of Whiffle Ball, likely named for the noise of the air passing through the holes in the ball. Others noted its appearance in Dorothy L Sayers’s detective story Murder Must Advertise of 1933, in which Lord Peter Wimsey, posing as Death Bredon, becomes deeply involved in the advertising campaign for a brand of cigarettes called Whifflets, which must surely be a sly reference by Sayers to an old sense of whiffler for a smoker of tobacco:

It was in that moment, and while Chief-Inspector Parker was arguing over the line with the office telephonist, that Mr. Death Bredon conceived that magnificent idea that everybody remembers and talks about today — the scheme that achieved renown as “Whiffling Round Britain” — the scheme that sent up the sales of Whifflets by five hundred per cent in three months and brought so much prosperity to British Hotel-keepers and Road and Rail Transport.

Also in detective fiction, Bruce Beatie and Ed Matthews tell us that a more directly relevant mention is in Ngaio Marsh’s Off With His Head (Death of a Fool in the US), in which one of the characters is the whiffler in a traditional Morris dance, who clears a space for the performance:

Through the archway came a blackamoor with a sword. He had bells on his legs and wore white trousers with a kind of kilt over them. His face was perfectly black and a dark cap was on his head. He leapt and pranced and jingled, making complete turns as he did so and “whiffling” his sword so that it sang in the cold air.

Bill Marsano was one of many who pointed out that whiffling-waffling, as it was described in the piece, “thrives in the U.S. under the name of baton-twirling, which is almost exclusively the province of pretty and lightly-clad young women who typically perform at parades, football games, etc. In the southern US it is a very competitive activity, not to say sport.”

Yet another American usage was reported by Jim Tang: “This explains that most anachronistic of baseball terms, he whiffed. Bad enough that you missed the ball three times to strike out, but to have it equated with a term for a light puff of air from your swings? That is just piling it on. Which, of course, is the point, because the insult game was invented by baseball.”

This, likewise, produced many comments, especially about other senses of the word, such as get cracking, to get a move on, and to take a crack at, to attempt something. The latter seems, from evidence in the Oxford English Dictionary, to have evolved from musketry (being the noise of the gun) and to parallel take a shot at. A wisecrack is from the Scots sense of talk or discussion, as is crack for a cutting or insulting remark.

John Nightingale introduced me to the odd US term crack varnish for the “very fastest and best passenger train”. The second part of this term baffled me until I learned from the Dictionary of American Regional English that from the 1880s varnished car was a slightly sarcastic railwaymen’s slang term for a passenger vehicle, as such accommodation at the time contained much highly varnished wood, in contrast to utilitarian freight and staff wagons. Over time this became abbreviated to varnish for the car and then for the whole train. A crack varnish, of course, was the very best of its type.

This word popped up in a book of short stories I’ve just finished reading:

So, the land there is thickly forested to the north and the forest grows even more thickly and densely to the south. This southern cantrev of forest is so very dense, indeed, that there is no other place in the world with trees of such height or magnificence or profusion.
Adam Robots, by Adam Roberts, 2013. 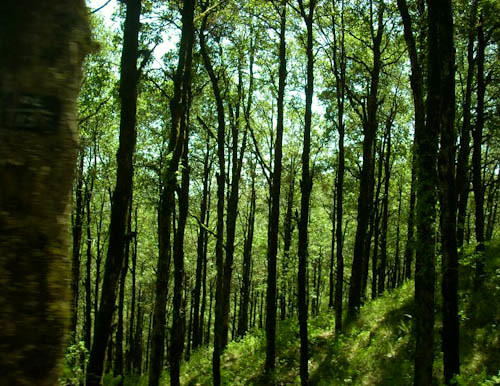 A cantrev — the word has been spelled in numerous ways, including cantref and canthrif — turns out upon enquiry to have been a medieval legal division of Wales (from the Welsh cant, a hundred, plus tref, a town or place). It’s closely similar in sense to the English hundred, a division of a county or shire for administrative purposes. In fact, in medieval England yet another form of the word, cantred, was used almost synonymously with hundred.

The word has long had only historical interest. But it has enjoyed a minor revival in SF and fantasy — as in Lloyd Alexander’s Prydain Chronicles — as an unfamiliar term with which to communicate a sense of otherness. The revival is most probably due to modern interest in the medieval Welsh epic The Mabinogion, in which cantrev often appears.

3. Not a happy bunny

Q From John Gray: Why did not a happy bunny come into existence? Surely bunnies are largely devoid of facial expression, so determining their state of happiness or otherwise is not readily possible. Online searches seem to say nothing about the origin of the phrase.

A People have been writing about this in a mildly puzzled way at least since John Mullan included it as his Phrase of the Week in The Guardian during November 2002, saying it was “now everywhere” and that “It started being common four or five years ago, especially as an understated description of a person’s displeasure.”

The earliest example I know of appeared in Punch magazine in November 1989 and I would have said that it had already peaked in popularity by 2002. However, a British newspaper archive shows that it has been used even more in the past two or three years. It long ago became a catchphrase and a cliché, mostly in Britain. It has also spawned its inverse, though it is still much less common to learn that somebody is a happy bunny than an unhappy one.

There’s a good reason for nobody online being able to say anything useful about its antecedents — no expert seems to have the slightest idea about its origin and most writers on contemporary slang have ignored it. Nigel Rees, presenter of the BBC radio quiz programme Quote … Unquote, has for many years included it as question 1368 in his list of unsolved phrase origins. This shows no signs of being resolved any time soon.

It may be a disparaging comment drawn from children’s literature, in which fluffy bunny rabbits are usually happily hopping about. To refer to a person’s distress by saying he isn’t a happy bunny is to infantilise his emotions. But people sometimes use it about themselves, when it becomes self-deprecating. There may be a link to British television advertisements for the Duracell Bunny (matched in the US by ones for the Energizer Bunny). This is a pink rabbit, always with a fixed grin and originally endlessly beating a drum. The adverts have been around for some decades (they began in 1973), so it’s not an implausible origin.

Other than that, all I’ve been able to do is add another mystified comment to the many that precede me. Add an appropriate bunny-related punchline if you like. I’m running out of energy.

• “Taking inclusive language a bit too far,” commented John Martin on an item in The Guardian on 23 August, which quoted the TechCrunch website on Microsoft’s CEO, Steve Ballmer: “If his or her successor doesn’t like the ‘One Microsoft’ vision, he’ll have to do another reorganization.” TechCrunch has corrected its version.

• Tereza Shortall headed her contribution “Every woman’s nightmare!” having read this advertising blurb on the Harrods website: “Tailored in beautiful virgin wool, these trousers from Alexander McQueen will instantly become the most exquisite staple in your all-rear-round wardrobe.”

• Staying with Harrods, Pat Beattie was in the famous Knightsbridge store and spotted that the floor directory, expensively inscribed on a marble wall, included the entry, “Lower Ground, Menswear, Fashion Accessories, Gifts and Stationary.”

• In the New York Daily News of 18 August, Tanya Thomas found a report describing the trial of Jodi Arias for killing her boyfriend, Travis Alexander: “Arias claimed intruders broke into the house and gave interviews to ‘Inside Edition’ and ‘48 Hours Mystery’.”

• Tony Willett found this in a list of spa treatments in the brochure of The Academy at the City of Bath College: “Relax in our sauna and steam room, distress in our hot tub and drift away in our dry flotation bed.”