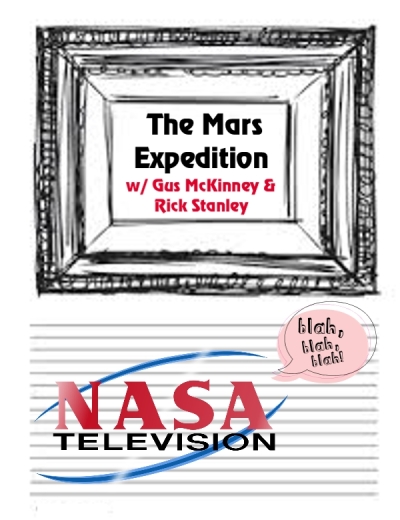 homecoming of two heroes of space and their incredible story of riding the plume of a volcano to break free from Martian gravity.

“Not if we wanted to get back home,” adds Gus to this already flawed storyline. “We came back with 2 tons worth of samples; vegetation, soil, water, you know, for our boys in the Lab. They wouldn’t let us land if we came back empty handed.”

“That’s right Commander McKinney! We needed the heat thermals to get our butts out of the atmosphere.”

“And yet you didn’t bring any pictures back to share?” RG II goes off-script to ask the question most viewers would ask if they had the chance.

“We were so busy doing the calculations required for liftoff that I guess we forgot.” Stanley is the most convincing of the pair.

“Then could you describe the Martian landscape to our viewers?  We are receiving that very question from a million people across the world.”

Rick Stanley digs deep for a way to frame his description. 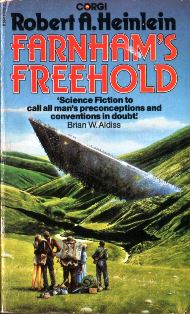 “In one of my favorite author Robert Heinlein’s book Farnham’s Freehold, a family already in their bomb shelter, is bombed into the future. Not to a different spot, but one where there are no roads or buildings near where their house once stood. Only the hills and trees and rivers are there, barely recognizable to the keenest observer. The rest of the book is about pretty graphic social interaction, so I won’t bother you with that.

“In our case, Commander McKinney had us land on the other side of Mars… from that structure… not sure it is manmade or not. We managed to traverse the full ½ of the planet circumference…”

“Good thing, right Gus? We weaved and climbed and dodged our way on some of the same ground covered by Spirit and Opportunity, except back then the rivers were dry and we’re not sure anything was ever green and growing. So are maps were mostly

“And not a single hydrogen station to stop and ask directions from.”

“We could only travel by day, even though Solution was equipped with a virtual star map.”

“Just like the ancient mariners we were!” Gus tries to keep things light. The public has seen nothing but press releases and publicity photos ever since the 1st SOL test flights. All that served to do was enhance his legendary family’s space lore. “If I can interrupt, my favorite moment was when we drove Solution into a river. What a kick to see how she handles underwater!”

I have 16 trillion reasons to be sad this morning, a measly two such being my sons and their children. They will be spending the rest of their lives paying for bloated government and unproductive citizens; the few were never meant to support the many.

One of my favorite Sci Fi authors is Robert Heinlein. In his book FARNHAM’S FREEHOLD a family with a bomb shelter is blasted into the future by a ground zero nuclear missile strike. When they emerge from their shelter, the seven or so people discover a world that is almost the exact opposite of the 1960’s Cold War world they left.

The Farnhams were left to deal with a world not of their choosing. I can relate: Colorado has legalized marijuana–Maryland gay marriage. This is not the world with which I am familiar and all that I am left with are fond memories; when morality ruled the day and our country had a united vision.

I thank God for the country he helped found 246 years ago, one where like-minded people flee a puritanical kingdom which was determined to force their will on its subjects. My high school buddy Kathleen Rae Hannah put it so well last nite, “So now we are socialists?”