The Manhattan Project was a research and development project that produced the first atomic bombs during World War II.

It was led by theUnited States with the support of the United Kingdom and Canada. From 1942 to 1946, the project was under the direction of Major General Leslie Groves of the U.S. Army Corps of Engineers; physicist J. Robert Oppenheimer was the scientific director of the Los Alamos National Laboratory that designed the actual bombs. The Army component of the project was designated the Manhattan District; “Manhattan” gradually superseded the official codename, Development of Substitute Materials, for the entire project. Along the way, the project absorbed its earlier British counterpart, Tube Alloys. The Manhattan Project began modestly in 1939, but grew to employ more than 130,000 people and cost nearly US$2 billion (about $26 billion in 2014 dollars). Over 90% of the cost was for building factories and producing the fissile materials, with less than 10% for development and production of the weapons. Research and production took place at more than 30 sites across the United States, the United Kingdom and Canada. 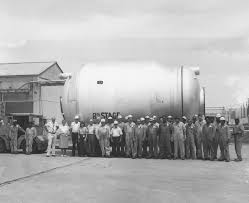 Two types of atomic bomb were developed during the war. A relatively simple gun-type fission weapon was made using uranium-235, an isotopethat makes up only 0.7 percent of natural uranium. Since it is chemically identical to the most common isotope, uranium-238, and has almost the same mass, it proved difficult to separate. Three methods were employed for uranium enrichment: electromagnetic, gaseous and thermal. Most of this work was performed at Oak Ridge, Tennessee. In parallel with the work on uranium was an effort to produce plutonium. Reactors were constructed at Oak Ridge and Hanford, Washington, in which uranium was irradiated and transmuted into plutonium. The plutonium was then chemically separated from the uranium. The gun-type design proved impractical to use with plutonium so a more complex implosion-type weapon was developed in a concerted design and construction effort at the project’s principal research and design laboratory in Los Alamos, New Mexico.

The project was also charged with gathering intelligence on the German nuclear energy project. Through Operation Alsos, Manhattan Project personnel served in Europe, sometimes behind enemy lines, where they gathered nuclear materials and documents, and rounded up German scientists. Despite the Manhattan Project’s tight security, Soviet atomic spies still penetrated the program.

The first nuclear device ever detonated was an implosion-type bomb at the Trinity test, conducted at New Mexico’s Alamogordo Bombing and Gunnery Range on 16 July 1945. Little Boy, a gun-type weapon, and Fat Man, an implosion-type weapon, were used in the atomic bombings of Hiroshima and Nagasaki, respectively. In the immediate postwar years, the Manhattan Project conducted weapons testing at Bikini Atoll as part of Operation Crossroads, developed new weapons, promoted the development of the network of national laboratories, supported medical research into radiology and laid the foundations for the nuclear navy. It maintained control over American atomic weapons research and production until the formation of the United States Atomic Energy Commission in January 1947.