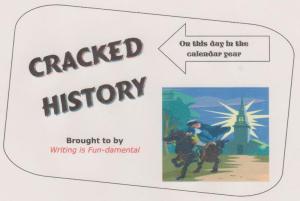 On December 14, 1911, Roald Amundsen of Norway narrowly beat a doomed English expedition to win the race to the South Pole!

While the Norwegians made it back to base camp safely, the ill fated Englishmen died along the way back, carrying the crushing burden of knowing they had been beaten.

Roald Amundsen was an accomplished explorer and learned during his forays into Eskimo country (Inuit and Aleut Native Americans were then known as Eskimos) gave him the experience and the knowledge from the natives of how to survive in polar conditions.

Key items of knowledge included the use of meat to stave off disease, use of sled dogs, and how to use animal skin based clothing instead of the more conventional but less effective wool then used by Europeans.  Amundsen used this expertise to carefully equip and plan his expedition, and set off with 4 sleds pulled by 54 dogs.  His plan included eating some of the dogs on his return trip, which they did!  The 5 men returned with only 11 of what was once 54 dogs.

The doomed Scott expedition used a combination of inferior dogs, horses ill suited for polar conditions, and motorized sleds (an early version of snowmobiles).  In 1911 the state of gasoline engine reliability was nothing like today, and with the failure of his inferior animals, Scott and friends paid for their mistakes with their lives.

Not one to rest on his laurels, Roald Amundsen later led a trip to the North Pole in 1926 and became the first (with his companions) to verifiably reach the North Pole.  The previous expeditions of Cook, Peary and Byrd all claimed to have reached the North Pole earlier, but each of those claims are disputed today. (Note: Amundsen’s North Pole feat was achieved via aircraft.)

Amundsen died in 1928 in the Arctic while flying on a rescue mission, probably crashing into the Barents Sea.  He is remembered today with numerous land marks and bodies of water in the Arctic and Antarctic named after him.