“Let’s hit the archives for the work of early photographers, Sherman My Boy.”

AMAZING PHOTOS FROM THE EARLY DAYS OF PHOTOGRAPHY

Let’s start out with this unique image from the 1880s that shows the cutting edge of roller coaster technology in the 1880s. Taken by photographer E.G. Morrison, it shows the ride running from the Arcadia Hotel in Santa Monica to the bluffs below. The ride was entirely powered by gravity, taking guests on a switchbacking track for the low, low cost of a single nickel. Through the start of the 20th century, hotel owners competed with each other to build larger and more thrilling entertainments on the midway.

Roller Coaster At The Arcadia Hotel

This is a deeply strange image that, without explanation, could launch a hundred UFO theories. But the reality is remarkably easy to explain. This is a tetrahedral kite, a solid-body flying device composed of a number of tetrahedral cells connected together to create a larger form. This one in particular was constructed in the workshop of Alexander Graham Bell in 1906. He was trying to develop a kite that was large enough to carry a motor for propulsion as well as a pilot. Unfortunately, he didn’t succeed, but the experiments were cool to watch.

Some of the earliest proponents of photography in the 19th century were scientists who embraced the ability to record visual evidence of their experiments. While many of these experiments were fairly benign, there were always guys like Guillaume Duchenne de Boulogne willing to push the envelope. De Boulogne was a neurologist who was obsessed with the effects of electricity on the brain, and he developed many different devices to apply voltage to the skin and see the results. This striking picture is of De Boulogne performing an experiment on an older man to move his facial muscles using faradic shocks on the surface of his skin. It was published in his 1862 treatise The Mechanism Of Human Physiognomy.

In an age of information being compressible to tiny electrical impulses, it’s easy to forget that the great libraries of the past were overwhelming storehouses of information. This fascinating picture from the Cincinnati Public Library was taken in the 1870s in the “Main Hall.” Widely believed to be the most impressive public library in the country during the 19th century, it sported five tiers of alcoves for shelving, with narrow walkways between them. Sadly, the building was torn down in 1955.

The depiction of the female form has been a popular photographic pursuit for almost as long as the art has existed. This bizarre yet strangely attractive photo hails from the Charles H. McCaghy Collection of Exotic Dance at Ohio State University. McCaghy was a professor of criminology who amassed an incredible personal archive of photos and information about more than 1,500 exotic dancers. This 1867 photo was taken by the J. Gurney & Son studio of a dancer in “The Devil’s Auction,” a massive performance first staged at Banvard’s Grand Opera House in New York City.

When you look at this image, you might think you’re gazing ahead into the post-apocalyptic future where the Seven Wonders of the World have been destroyed by the ravages of time. But this is actually a picture of the legendary Sphinx of Giza from the past – around the 1870s. After the Necropolis of Giza was abandoned during the First Intermediate Period (around 2180 B.C.), the sands swallowed up everything but the head of the massive statue. It wasn’t until 1936 that the entire thing was excavated.

On January 9, 1839, the first practical photographic process (Daguerreotype) was revealed by the French Academy of Sciences.

Digging deeper, we find many people had been working on the development of practical photography, but Daguerre, a French chemist, was the first to produce a process that was portable, not the size of an entire room, and that resulted in images of reasonable quality.

One of the great discoveries by Daguerre was the ability to use paper coated with concoctions containing silver and other chemicals instead of the image being produced on a metal plate.  That sure makes carrying photos of your dog in your wallet easier!

Milestone inventions are usually thought of as being a goldmine for the inventor, but that is not always the case.  In this case, Daguerre and the French government both wanted the world to have access to his invention for free! Daguerre made a deal with the government for an annual pension and all the other inventors had legal access to the Daguerre process to improve on it as they could.

Obviously, those improvements were made, and cameras and film have progressed to the point where we now have digital cameras that do not even need to use film.  Most cell phones have a camera built in, and many of those can take moving video.  Photography has come a long way from having to expose the metal plate covered in various chemicals for several minutes and cameras bigger than a breadbox to tiny cameras that can be pinned on one’s shirt or disguised as a ballpoint pen. 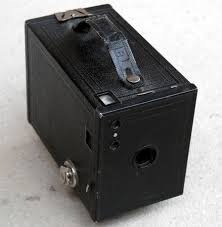 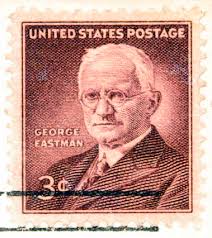 George Eastman (July 12, 1854 – March 14, 1932) was an American innovator and entrepreneur who founded the Eastman Kodak Company and popularized the use of roll film, helping to bring photography to the mainstream. Roll film was also the basis for the invention of motion picture film in 1888 by the world’s first film-makers Eadweard Muybridge and Louis Le Prince, and a few years later by their followers Léon Bouly, Thomas Edison, the Lumière Brothers, and Georges Méliès.