Blount goods, with Clete having to shoulder much of the work. It seems that because of Willy’s parentage, he is not allowed inside any building, except the outhouse. Come to think about it, they have not seen a single dark skinned person since they got here, unheard of in the South.

“Let’s get out of this place, Willy, it gives me the creeps.” Not only is Clete exhausted, he is perplexed. In Quincy, Willy is a respected member of the community. Hank Blount makes it clear that he or any other Negro would not be welcome in the future.

The best sight for Willy, in the past three hours, is Blountstown in the rear view mirrors. Memories from his days at Fort Sumter South had been confined to unpleasant late night dreams… until he meets Hank Blount. The icy stare that pretends Willy is not there, speaking to a third party to communicate, being refereed to as “those people”, are reminiscent of the management skills of Jefferson Smythwick.

He no sooner wants to revisit those days than modern-day Israelites have interest in building pyramids in Egypt.

He is so disturbed, in fact, those five miles out of Hell Town, he pulls over to give Clete his big chance at navigating the Mack. It’s his lack of concentration, not confidence in Clete that prompts him to do so. No matter why, Clete is like a kid in at a candy jar. If he can drive his brother’s Peerless (auto), this should be easy.

But there is a difference between the manual driving of the machine and knowing where you are going. Willy is so busy watching Clete’s shifting mechanics that he doesn’t see him veer to the left (north) at the first fork in the road. The sign had read “ROCK BLUFF 3 miles”. Had it not been for the narrowing of the roadbed, he may not have noticed their wayward path.

Barn at the Fork in the Road by Betty Sue

…The Emancipation Proclamation is loosely applied, conveniently ignored, even mocked by owners of plantations…

Leon County lays claim to Tallahassee. Gadsen County has its Midway and Quincy. This is

like comparing a metropolis to a berg or an employer to a slaver: John Ferrell to, let’s say, Jefferson Smythwick.

Blacks take a back seat; their rightful place in the previous equation, according to some and likely to be kept in this place by shrinking number of die-hard racists. Jefferson Smythwick is such a man; Confederate to the bone, longtime slave owner, who refuses to let go of the past. ‘I’m too old to change.’ ‘Every one of my niggers is treated better than they deserve.’

Regarding the first quote, that may be true. As for the second, it is true only if you include third rate food and tar paper shacks as forms of reasonable compensation. The use of the “N” word indicates his level of respect for his “Employees”.

ignored, even mocked by owners of plantations the size of Smythwicks’ Fort Sumter South. Five thousand acres of cotton, rice, tobacco and sugar cane require many to tend its fields. Because of the sprawling acreage involved, land is divided into numerous farms, each with its own unique management position: the overseer.

There are very few plantations systems operating in 1896, definitely not sanctioned by any form of government, local or national. But, and a big but it is, the South is still healing itself, a mere 33 years after the Civil War. A tiger cannot change its stripes, so a rebel will always be a rebel.  There is no doubt an 80 year old rebel in the town of Midway.

It is here in Midway, on one of the farms of Fort Sumter South, that we find the Campbell family, living and working as a unit. Willy Campbell is one of the best workers in these parts, a cigar maker by trade, as was his father before him. His combination of strength and aromatic skill make him a valuable human commodity. Wife Amanda, compliments him well, caring for the family in their private shack; a tainted privilege, considering that most families are split up. Some others have headed to the relative freedom north. The Campbells fall somewhere in between.

Amanda also provides the collective with five healthy children, but that counts young Emily, the fourth oldest having been run over by a runaway cargo wagon at the age of 2. Females have less worth than do males, of which Hosea and Alfrey make an oldest and youngest sandwich around Agnes and Francis; four children to grow up in a world of hard work and suppression.

This fine Negro family is viewed from the outside, as the victim of a cruel anomaly. They are, for all intents and purposes, still slaves. Yet they are being treated just well enough that they think they have it pretty good. Slaves are not paid, do not own anything of real value and, most importantly, are not free to “quit”. 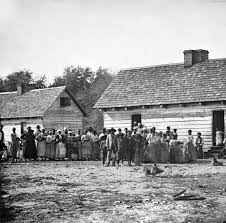 “A farm is an irregular patch of nettles bounded by short-term notes, containing a fool and his wife who didn’t know enough to stay in the city.”
― S.J. Perelman

“While eating a delicious food, remember the peasants and the workers who made this possible!”
― Mehmet Murat ildan

“She’s on the stairs, ma’am, getting her breath,’ said the young servant, who had not been long up from the country, where my mother had the excellent habit of getting all her servants. Often she had seen them born. That’s the only way to get really good ones. And they’re the rarest of luxuries.”
― Marcel Proust, Remembrance of Things Past: Volume I – Swann’s Way & Within a Budding Grove

“The Empire does not require that its servants love each other, merely that they perform their duty.”