…The Lord asks us to share our brothers’ burden. I need to take up the cause, stand shoulder to shoulder with my kinsmen,…

“What does your cousin say?” asks Martha Ferrell of her husband John, who reads a letter from Scotland intensely. It is dated 22 March, 1915, received the day before Thanksgiving same year.

“Oh, Martha, they’re suffering great hardship. Nearly everything is rationed, living off their potato plot, they are. Most of the grain they grow goes to the cattle; the rest must be submitted to the war effort.” As he reads Sir James M. Barrie’s tale of woe, waves of guilt wash against his spirit, remembering the happy days of his youth, playing with James. John’s own son is named after his relative left behind, after the Ferrells abandoned the  Isle clan for a new life in Florida. “He fears his son, Matthew, will be drafted into the British Army, though a recent bout of consumption may disqualify him from battle.

“‘How ironic; spared the horrors of war by a disabling disease.’”

“Those are his very words, aren’t they?”  She recognizes the work of a writer, albeit far from his wispy ‘Peter Pan’. “I so love his letters, every one a masterpiece unto itself.”

“I’ve been praying about the plight of our people. We are so blessed by the lord, insulated from adversity, bounties beyond deserving. I ask myself, ‘what can I do to support my homeland an ocean away?’ My answer is never the same.” 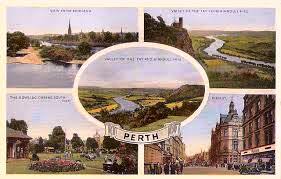 “What if we take a collection of goods, you know, foodstuffs, clothing, anything the Panhandle can offer that will help them survive hostilities.”

“Yes, yes, and we can hire a ship out of Panama City to carry them to Perth. How I would love to see old James again!”

It was a splendid idea until mention of him going home to the Central Lowlands enters in the back door. “Must you go to Scotland? Why put yourself in harms way?”

“The Lord asks us to share our brothers’ burden. I need to take up the cause, stand shoulder to shoulder with my kinsmen, making a difference in their community.” John Ferrell lacks only a kilt. “Please wire Dundee with the news of our plan. I am going to begin gathering the cargo, I think Herb Love will jump right in with both feet, if I know him and Jacques Francoise will mix up some medicines, maybe help Matthew with his tuberculosis. And every farmer in Leon and Gadsden County will surely contribute something. I know we can fill a small freighter.”