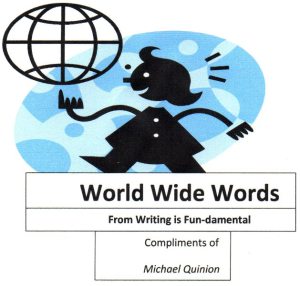 Criticise. “It might be worth mentioning,” emailed Michael Bawtree, following my comment last week, “that because the verb criticise is no longer used in a neutral sense, the verb critique has taken its place. As a verb and a noun, critique refers to a neutral judgement of something. Why the French form has kept this objectivity is an interesting question.” Peter King made the same point and added, “The noun critic seems to swing both ways, as it were. The expression ‘it has its critics’ suggests only disapproval but it is still possible to say ‘the critics loved it’ without apparent contradiction.”

Animadvert. Patrick Martin sprang to the defence of this word, which I discussed last week: “I must protest. It must be tough on a word to be called obsolete in its primary meaning by the writers of dictionaries. I have used it for years to mean ‘refer to’, maybe in a mock-pompous way. I never even knew that it had a derogatory meaning.”

Rogetisms. Of this word in the last issue, Malcolm Ross-Macdonald mused, “Combining Rogetisms with homophones could produce an almost uncrackable code, as in ‘Cos brisket rump velocipede castoff’. By the time the spooks had parsed the first word as ‘lettuce’ the proposed meeting behind the bicycle shed would surely have come and gone.”

Twigging it. I used the verb twig in last week’s issue, which provoked this reply from Ben Wise: “I have no idea what this means, although you used it in passing, with no indication it might be as research-worthy as everything else in today’s collection of mystery words. Twig is also used in the BBC article you linked under uptalk. I suspect it’s a Britishism which hasn’t yet made the hazardous journey across the pond. Please clarify for us benighted New Worlders in your next post. Thanks.”

My pleasure. It is a British colloquial term, meaning to understand or comprehend something. It dates from the eighteenth century, meaning to watch or inspect and then to discern or recognise. Near the end of the century the noun came to mean style or fashion, from which came in twig, in fine twig and in prime twig, all meaning stylish or admirable and all long since defunct, though the root verb has survived. The Oxford English Dictionary says of this sense of twig, “Origin unascertained”; Jonathon Green tentatively suggests an origin in dialect twick, to jerk.

This might look like one of the many words ending in -ee for a person affected in some manner by the action of the associated verb, such asemployee, inductee, internee, interviewee, or licensee. But the ending is accidental, as in dungaree, squeegee and jamboree.

A raparee was once an Irish foot soldier, armed with a weapon that in Irish was called a rápaire. This is a cousin of English rapier, though not the same sort of weapon, the Irish one being a short pike. The Irishmen so armed were an irregular soldiery who fought on the Catholic Jacobite side during the war that William III waged in Ireland in 1689-91. During and after the war, many took up thieving and banditry, which is why their name is thought also to contain another Irish word, rapaire or ropaire, a violent person, irregular soldier or robber.

Raparees became a menace and in 1695 the government passed An Act for the Better Suppressing Tories, Robbers, and Rapparees. Tory, the nickname of members of the Conservative Party in the UK, is from Irishtoraidhe, a highwayman or outlaw, and initially referred to Irish peasants dispossessed by English settlers and living as robbers. It was taken up as a term of political abuse in the 1680s for those who opposed excluding the Catholic James from succeeding to the English crown.

Raparee is now solely of historical interest, but this modern example demonstrates that its relevance soon spread far beyond Ireland:

We were building a schooner from the wreckage when a horde of ill-favoured raparees attacked us — Dyaks and Malays led by a nasty confident quean, a bloody-minded covetous froward strumpet.

The Nutmeg of Consolation, by Patrick O’Brian, 1991. A quean was an impudent or badly behaved woman, from Old English cwene, a woman, hence also queen. A froward person was one difficult to deal with.

The idiom not giving a rap, meaning not caring, is said to be connected. In the eighteenth century, Ireland was short of coinage and counterfeit equivalents of coins of small value such as the halfpenny or farthing were widely used instead. These came to be known as raps, in part from Irishrap for a bit or piece but also as a link to raparee. The idiom is recorded from later in the century.

Vacation blues. A cry of linguistic distress arrived from David Rosen: “The Boston Globe of Saturday 16 August carries a picture of a golfer in the buff and describes taking a naked vacation as nakationing. I suppose, like staycation for those who do not travel for vacations, it is a variation on vacation. What’s next? Will the equine set take neighcations? Those who like the sea take baycations, and will fresh water enthusiasts takelakeations? Will those who do not have vacations as a work benefit envy those who have paycations? The possibilities are limitless.”

By the way. A Sic! item last week mentioned Rhosllanerchrugog, a place name that will look strange to anybody not acquainted with Wales and the Welsh language (roughly translated, it means “the moor of the heathery glade”). Stephen Phillips pointed out that it’s of linguistic interest, being an enclave of Welsh speakers in an English-speaking part of Wales, near Wrexham, noted for its unique Welsh words. He quotedWikipedia: “The main example is a word that has become synonymous with the village: nene, meaning ‘that’. It is pronounced as ‘nair-nair’, and is sometimes used in association with another unique word, ‘ene’ (air-nair), meaning ‘there’. An example is the question ‘Be ’di nene ene?” — ‘What’s that there?’.”

Neologism. Reader Norma Bates pointed out the recent growth in use of a verb that’s not yet in any dictionary, the ugly amnetize (fromamnesty). It’s not new — I’ve found an example from 2006 — but it’s currently being used in right-wing US political debate specifically to refer to regularising the status of illegal immigrants. It seems to be associated in particular with Fox News.

Elsewhere. An interesting extract from Steven Pinker’s forthcoming book, The Sense of Style: the Thinking Person’s Guide to Writing in the 21st Century, appeared in the Guardian last Saturday. He argues that many supposed rules of grammar can often safely be ignored, including when to use that and which, dangling modifiers, split infinitives, very unique and who versus whom. I hope to be able to say more about the book next month. He doesn’t mention hopefully, which is discussed in anarticle in Slate to illustrate the value of the Hyper Usage Guide of English, a collection of 123 usage problems from 75 usage guides being created as part of the Bridging the Unbridgeable Project at the Leiden Centre for Linguistics. The British slang lexicographer Jonathon Green tells me that he has put together some timelines of slang terms based on his 2010 dictionary of slang. One details terms for being drunk, a second terms for having sex.

Q From Pieter Bosman: We have a virtual Babel of official languages in South Africa, eleven of them, with English the de facto language of communication. I am often asked to explain the meaning and origin of seemingly obvious expressions and find myself stumped, as I tend to be satisfied with knowing the meaning without thinking of their etymology. Thus it was recently with footloose and fancy free. Searching the internet provided some answers, but they seem too glib to be true.

A That’s certainly true. I’ve found one story which claims that it’s from the foremost member of a prison chain gang in the American south, who had one ankle left free so he could move more easily and lead the others. Another has it that the expression derives from one-time Thames river barges, which didn’t have a boom to which the lower edge of the mainsail could be lashed, which therefore hung free and was said to be loose-footed. We may safely disregard both of these.

The idiom means that a person is without responsibilities of any kind and can go wherever he wants. Its first part, footloose, also has this meaning. It’s American, dating from the 1840s:

The Senate declared this connection unlawful, and immediately divorced this great financier from the revenue bill, sent the bill back to the House without its defilement, leaving the great financier again foot loose in the world.

It didn’t become common in Britain until the 1940s, earlier appearances being in despatches from the US, for example in reports of presidential speeches or as here:

You see, I was defending one of the worst horsethieves in Western Texas this afternoon, and I cleared him. He is foot-loose now, and I’m afraid he will come around to-night and steal my horses. Nobody’s horses will be safe until that double dyed scoundrel is out of town.

Fancy-free is natively British and means to be unconstrained by amorous entanglements, having no sweetheart to tie one down. Shakespeare is the first recorded user, in A Midsummer Night’s Dream of about 1600.Fancy originally had the meaning of a fantasy, a ghost or a hallucination. It came to mean a whim or caprice and briefly an inclination towards love. This second sense was no longer current when Tennyson wrote, “In the spring a young man’s fancy lightly turns to thoughts of love”, but fancy-free kept the association.

The evidence suggests that the two words were put together about 1880 in the US to make a neatly balanced alliterative phrase. This is the first I’ve been able to find:

All of which, fellow citizens, means that the people are footloose and fancy free.

The combined expression footloose and fancy-free isn’t recorded in the UK until the 1950s, presumably a wartime import by US armed forces. The first appearance in the Times is in 1954 and refers to a revue with that title. It only becomes common in the 1960s.

• Tom Barrett supplied an extract from an Associated Press item dated 15 August in the Province, Vancouver: “Private and foreign groups have for years been trying to retrieve the historic treasure. Believed to be buried deep beneath heavy silt, they have been deterred in part by murky waters and strong currents.”

• The trailer for this week’s Open Country programme on the BBC’s iPlayer site begins, “Revered by fly fishermen, Helen Mark visits the famous chalk streams of Hampshire and Wiltshire.” David Sutton found it and wrote, “I am sure many of us would like to join these discerning anglers in their proper appreciation of Ms Mark.”

• Megan Zurawicz tells us that on 15 August the website of WTHR, a TV station in Indianapolis, reported that “Speedway police are looking for a man wanted in a theft of a local restaurant earlier this week.” But how did he carry it away?

• The magazine of the Inland Waterways Association’s South West region is appropriately entitled Sou’Wester. John Gray read this in its August issue: “Back in 1969 Ian built his first boat in the form of a flat bottomed punt with a roof powered by a 4 horsepower outboard motor.”

• Niall McLaren came across this Australian report in the Daily Mail of 15 August: “Officers have appealed for a helping hand in order to catch a bearded bandit responsible for a string of burglaries in Victoria. The man has had a few close shaves at various factories south-east of Melbourne.”