Stowaway Peers Out at the Speed of Light by James Rosenquist

Just how long would it be before an Earth produced space vehicle can match the fleeting speed of the outbound NEWFOUNDLANDER?

That very subject is broached by the senior member of the Space Family McKinney, who along with the rest is traveling multiples of the speed-of-light, not by the grace of genius or invention, but by pure dumb (bad) luck, especially since the New Mayflower would have rescued them several years ago.

to Earth by now?” Sammy Mac enlightens anyone who bothers to listen. “If only I could steer this thing!”

“Yes dear, you’ve told us at least that many times in however many years it has been,” answers Celeste, who comprises one of the two other pairs of ears on the ship, “but we agreed to let the NEWFOUNDLANDER go its own way, likely with a purpose as we have determined and if we don’t stop where we think it is going to, then we’ll consider turning around.”

“We’ve come this far haven’t we? I guess it would be impolite to turn back right now. Hell, Gus & Deke may pay us a visit one of these years. The only obstacle I can think of is coming up with a hull superstructure that is strong enough to withstand the pressure and skin radiation. AND if they follow the path to cold fusion, which is the heart of the SOL Project, at least in its infancy — they might be zipping along like us in no time.”

“That is a wonderful thought Sam, but we may find ourselves in a tenuous situation soon. We may be treated like unwanted visitors, stowaways feeling like common squatters on someone’s private property.” She climbs into the King Ranch WABAC machine. “Do you remember that house Braden was supposed to look after back in ’23?”

“Yes, he was doing the neighbor rancher a favor, or so he thought, while they went north for the summer… they really hated the 100º  degree weather in the summer.”

“What is 100 degree weather Daddy?” Deimostra Samantha McKinney, the first child-of-space has many questions about a home planet that she has only heard stories about. 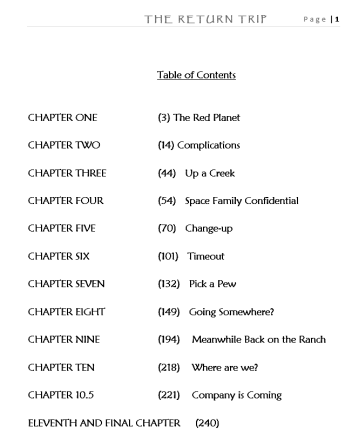