…“Looks like you made a friend, Fanny?” who is giving her the “he’s married” look…

“It looks like we’re close to home.” Martin is relieved that Eddie has gotten them back in one piece..

But before they can re-enter those 50 year old plaster partitions, they spy 2 some-ones sitting on the front stairs, who were hoping upon hope that William would show his elusive self and let them in out of the late-day chill.

“Should I drive around to the alley?” Eddie asks.

Constance jumps out of the stationary vehicle, a half block from the front door.

“Fanny!!!!!!!!!” She blasts past the person sitting next to her to apply a world-class hugs to a once lost partner. None of them expected such a swift conclusion to Fanny’s abduction. She

does acknowledge the stranger seated beside her, “And this would be?”

“Frank Herman. I do long hauls for Schneider Trucking, out of Wisconsin.” He extends his hand in friendship and does so in parting, “You’re safe now Miss Fanny, I’ll be on my way.”

“He gave me a ride back,” simply put. She points out at 61st Street and the big orange truck too large to come down Kimbark.

“Thank you Frank Herman. I guess Fanny will fill the blanks, but I want to thank you from the

bottom of my heart. I was not expecting to see that one for… a while,” she stops short of saying forever. “Can I give you something for your efforts?”

“I have your address in Tallahassee. I’ll stop by the next time I get down that way.”

“I’m sure Fanny will make up some of her famous fried chicken for you.”

“I’m counting on it.” The modest hero moves on down the road.

“Looks like you made a friend, Fanny?” who is giving her the “he’s married” look. 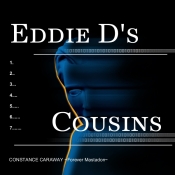 Eddie, for his part, escorts his road warrior brother back out to his truck, “My cousin Jimmy (cousin #3) drives a White Freightliner, part of the million mile club, but he drives forth and back to New York twice a week, has to go through Ohio. Do you drive in Ohio? Make sure you watch out for the speed traps… well any way he……”