…James and especially Abbey are conspicuously Southern, which at times is looked down upon by the Northern mainstream…

to the Pan-American Exposition by a fast-friend, President William McKinley; a friendship forged by tribulation and hardened by trustworthiness. The Exposition is a grand global event and the host would like his friends to share it with him.

“Must you always be so pragmatic, James?” Abigail’s husband has few flaws, but ever since his sights have been set on the future, the present seems generally trivial. “Loosen your tie, my love, and attempt to enjoy yourself. After all, the memories we hold of our honeymoon are soiled by the last few days. Let us have an early second honeymoon.”

“Can we ride the Ferris Wheel, can we?” he pleads like a five year old.

“This will be a cultural event, silly, not a circus!” she insists with her Southern charm, re-manifesting itself as it tends to do. James and especially Abbey are conspicuously Southern, which at times is looked down upon by the Northern mainstream. Fortunately, their university environment shields them from blatant prejudice.

“Remember, there is a two trunk limit, so leave some room for my things… and keep in mind that we will be away for three days, not three months.” James knows his wife well. She is easily the finest dressed woman on campus and would give Boston’s best a run for their money. In fact, nearly a half of their apartment stowage is occupied by dresses for every possible occasion.

“It is a girl’s responsibility to be ever at her best.”

“And you are.” He takes her warmly in his arms, fully realizing what a gem he has in her. No one will ever turn his head, for if they did, psychiatric treatment may be in order. 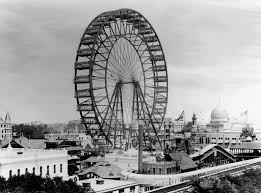 “Come and enjoy a World’s Fair”

From Wikipedia, the free encyclopedia
This article is about a type of amusement ride. For the original example, first erected in Chicago in 1893, see Ferris Wheel. For other uses, see Ferris wheel (disambiguation). A Ferris wheel, named after George Washington Gale Ferris, Jr., (sometimes called a big wheel, observation wheel, or, in the case of the very tallest examples, giant wheel) is anonbuilding structure consisting of a rotating upright wheel with multiple passenger-carrying components (commonly referred to as passenger cars, cabins, capsules, gondolas, or pods) attached to the rim in such a way that as the wheel turns, they are kept upright, usually by gravity.

Some of the largest modern Ferris wheels have cars mounted on the outside of the rim, with electric motors to independently rotate each car to keep it upright. These wheels are sometimes referred to as observation wheels, and their cars referred to as capsules, however these alternative names are also sometimes used for wheels with conventional gravity-oriented cars.

The original Ferris Wheel was designed and constructed by George Washington Gale Ferris, Jr. as a landmark for the 1893World’s Columbian Exposition in Chicago. The term Ferris wheel is used generically for all such structures, which are now the most common type of carnival ride at state fairs in the United States.[1]

Since the original 1893 Chicago Ferris Wheel, there have been nine world’s tallest-ever Ferris wheels. The current record holder is the 167.6-metre (550 ft) High Roller in Las Vegas, US, which opened to the public in March 2014.